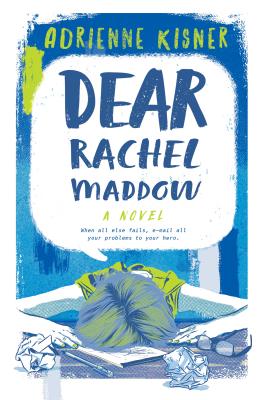 In Adrienne Kisner's Dear Rachel Maddow, a high school girl deals with school politics and life after her brother’s death by drafting emails to MSNBC host Rachel Maddow in this funny and heartfelt YA debut.

She watches her daily, and after writing to Rachel for a school project--and actually getting a response--Brynn starts drafting e-mails to Rachel but never sending them. Brynn tells Rachel about breaking up with her first serious girlfriend, about her brother Nick's death, about her passive mother and even worse stepfather, about how she's stuck in remedial courses at school and is considering dropping out.

Then Brynn is confronted with a moral dilemma. One student representative will be allowed to have a voice among the administration in the selection of a new school superintendent. Brynn's archnemesis, Adam, and ex-girlfriend, Sarah, believe only Honors students are worthy of the selection committee seat. Brynn feels all students deserve a voice. When she runs for the position, the knives are out. So she begins to ask herself: What Would Rachel Maddow Do?

Adrienne Kisner has master's and doctorate degrees in theology from Boston University and was inspired by her work with high school and college students to write Dear Rachel Maddow. She is also a graduate of Vermont College of Fine Arts with an MFA in writing for children and young adults. Dear Rachel Maddow is her debut.

"What unfolds is a heartbreaking but ultimately hopeful tale of a struggling student who sees an injustice and steps in. She does so unwillingly, but still, she does. Brynn is realistically depicted and even though this novel is epistolary, the supporting characters are well fleshed out, too... VERDICT A necessary purchase wherever there are teens."–School Library Journal, starred review

"In her debut novel, Kisner uses the epistolary format to portray the life of a girl who has very little parental support and is seemingly falling through the cracks at school. By writing in a first-person confessional style, Kisner allows her character to express herself with blatant honesty. Revealing Brynn to be an individual with realistic insecurities, biases, and complexities, Kisner playfully explores the very human manner in which a stranger like Maddow might come to feel like a friend and confidant."--Publishers Weekly

"Kisner perfectly captures the dueling emotions of hope and hopelessness as Brynn attempts to carve out a place in an often-hostile world, weaving wry humor into some gutting looks at addiction, loss, and abandonment. Dear Rachel Maddow is the perfect book for anyone who has ever felt truly understood by a comforting, friendly face smiling at them from the TV screen."--Booklist

"This has all the hallmarks of a classic teen drama: the snooty rich-kid villain, the deceitful ex-girlfriend, the crappy stepfather, and the smartass outsider supported by a band of misfits (Brynn’s classmates). That script is torn up, though, when the big dogs win—Brynn’s stepdad physically attacks her and then kicks her out, the rich jerk wins the committee seat using Brynn’s addict brother’s past against her, and the tone takes a turn from caustically funny to genuinely emotionally wrenching. Our girl’s a fighter, though, and she may be kicked but she’s not beaten; fans of dark humor and tough heroines will want to tune into this story of a luckless girl finally defining her own future—with or without the help of political pundits."-- Bulletin of the Center for Children's Books