Gangsters of Capitalism: Smedley Butler, the Marines, and the Making and Breaking of America's Empire (Hardcover) 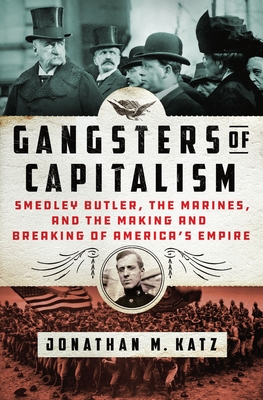 Gangsters of Capitalism: Smedley Butler, the Marines, and the Making and Breaking of America's Empire (Hardcover)

A groundbreaking journey tracing America’s forgotten path to global power―and how its legacies shape our world today―told through the extraordinary life of a complicated Marine.

"Far more extraordinary than even the life of Smedley Butler."
―The Washington Post

Smedley Butler was the most celebrated warfighter of his time. Bestselling books were written about him. Hollywood adored him. Wherever the flag went, “The Fighting Quaker” went—serving in nearly every major overseas conflict from the Spanish War of 1898 until the eve of World War II. From his first days as a 16-year-old recruit at the newly seized Guantánamo Bay, he blazed a path for empire: helping annex the Philippines and the land for the Panama Canal, leading troops in China (twice), and helping invade and occupy Nicaragua, Puerto Rico, Haiti, Mexico, and more. Yet in retirement, Butler turned into a warrior against war, imperialism, and big business, declaring: “I was a racketeer for capitalism."

Award-winning author Jonathan Myerson Katz traveled across the world—from China to Guantánamo, the mountains of Haiti to the Panama Canal—and pored over the personal letters of Butler, his fellow Marines, and his Quaker family on Philadelphia's Main Line. Along the way, Katz shows how the consequences of the Marines' actions are still very much alive: talking politics with a Sandinista commander in Nicaragua, getting a martial arts lesson from a devotee of the Boxer Rebellion in China, and getting cast as a P.O.W. extra in a Filipino movie about their American War. Tracing a path from the first wave of U.S. overseas expansionism to the rise of fascism in the 1930s to the crises of democracy in our own time, Gangsters of Capitalism tells an urgent story about a formative era most Americans have never learned about, but that the rest of the world cannot forget.

Jonathan M. Katz received the James Foley/Medill Medal for Courage in Journalism for reporting from Haiti. His first book, The Big Truck That Went By, was shortlisted for the PEN/John Kenneth Galbraith Award for Nonfiction and won the Overseas Press Club's Cornelius Ryan Award, the J. Anthony Lukas Work-in-Progress Award, and the WOLA/Duke Book Award for Human Rights in Latin America. His work appears in the New York Times, Foreign Policy, and elsewhere. Katz was a New America national fellow in the Future of War program and received a fellowship from the Logan Nonfiction Program. He lives with his wife and daughter in Charlottesville, Virginia.

Our favorite Books of 2022, The Progressive

"Like Butler himself, Katz’s book is singular and hard to pin down ... an exhilarating hybrid of studious history and adventuresome travelogue."
—Jacobin

"Katz’s realism may shock many readers, but they would be well served to join him in pulling back the curtain, tipping over the jugs of institutional Kool-Aid, and taking a long, cold hard look in the proverbial mirror. Like watching a train wreck in slow motion, this is a raw historical perspective that will both fascinate and unsettle."
—Task and Purpose

"Katz expertly weaves together his insights from his years as a reporter for the Associated Press, often stationed in the same countries that Butler helped to remold to meet the demands of American corporations." —Emilio Leanza, The Progressive

"Engaging ... Gangsters of Capitalism is not only a biography of Butler. The long-dead Marine also serves as Katz’s Virgil, leading him on a journey around the world and through the inferno of empire’s afterlife."
—The New Republic

"A perfect marriage of author and subject...Blending first-person reportage and analysis with impressive historical detail, Katz uses Butler’s story to explore war and capitalism in the United States, and to assess the gap between our morals and the lives we actually live."
—Emily Tamkin, The New Statesman

"Stellar."
—Pod Save The People

"Surprising and very well-written... Smedley Butler emerges in Katz’s book as a kind of tragic villain. An idealistic boy grown into a monster, he served his country by ruining other countries beyond repair, and eventually seeing how much harm he had done. If the Americans today fret about migrants from Central America and Haiti, or the revived hostility of China, they can now see the origin of those threats."
—The Tyee

"A clear-eyed assessment of the United States’ experiment with empire and its legacy, as well as a journey through the life of a celebrated military leader."
—U.S. Naval Institute Magazine

"In an unsettling era in which Americans have been forced to contemplate the possible demise of their global empire, the remarkable life story of Smedley Butler is a primer on how that empire was wrought out of a string of long-obscured 'small wars,' coups and interventions a mere century ago ... A clear-eyed, excitingly-told look at that history, and a bracing, necessary read for our times."
—Jon Lee Anderson, author of Che Guevara: a Revolutionary Life

“A relevant, readable effort to link past American colonialism to the present impulse to install homegrown leaders for life.”
—Kirkus

“A taut, unnerving account...By following Butler’s bloody trail around the world, Katz thoughtfully reckons with empire’s true cost”
—Daniel Immerwahr, professor of history at Northwestern University and author of How to Hide An Empire

"Butler was the Forrest Gump of US imperialism, in all the good and bad ways implied by that statement... Traveling in Butler's footsteps, Jonathan Katz devastatingly documents the toll of US interference around the globe from the late nineteenth century well into our own."
—Andrea Pitzer, author of Icebound and One Long Night

"Katz is a wonderful writer and deep reporter who is perfectly poised to tell the story of American Empire."
—Peter Bergen, New York Times bestselling author of Manhunt

"May well be the most intrepid biography you will ever read... as compelling and colorful as the man himself... For anyone seeking to understand how the modern world came to be, Gangsters of Capitalism is an essential book."
—Ben Fountain, author of the National Book Award Finalist Billy Lynn's Long Halftime Walk