The Rebellion of Miss Lucy Ann Lobdell: A Novel (Paperback) 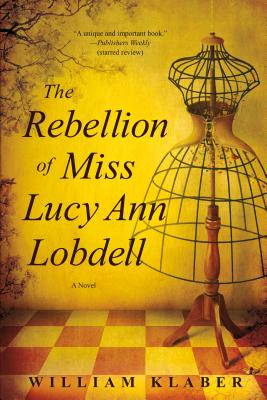 The Rebellion of Miss Lucy Ann Lobdell: A Novel (Paperback)

This book is based on the real Lucy Ann Lobdell and her letters and diaries.  She always planned to write a book about herself, but she was too busy crashing through all sorts of expectations and social norms.  She pretty much shook the world around her and did whatever she wanted,  with mixed but very interesting results. There is still a mystique to Lucy Ann (and all the other names she had over her life) that makes this book wonderfully juicy." ~ Jackie

— Jackie is our #1 Book Blogger at Tattered Cover and her word is gold.

At a time when women did not commonly travel unescorted, carry a rifle, sit down in bars, or have romantic liaisons with other women, Lucy Lobdell boldly set forth to earn men's wages. Lucy Lobdell did all of these things in a personal quest to work and be paid, to wear what she wanted, and love whomever she cared to. But to gain those freedoms she had to endure public scorn and wrestle with a sexual identity whose vocabulary had yet to be invented. In this riveting historical novel set in upstate New York in the 19th century, William Klaber captures the life of a brave woman who saw well beyond her era.

The Rebellion of Miss Lucy Ann Lobdell is the fictionalized account of Lucy's foray into the world of men and her inward journey to a new sexual identity. It is her promised memoir as hear and recorded a century later by William Klaber, an upstream neighbor. Meticulously researched and told with compassion and respect, this is historical fiction at its best.

William Klaber is a part-time journalist. He lives in upstate New York on a hill overlooking Basket Creek, a short way upstream from where Lucy Lobdell lived 160 years ago.

William is the coauthor of Shadow Play: The Murder of Robert F. Kennedy and author of the novel The Rebellion of Miss Lucy Ann Lobdell.

“In THE REBELLION OF MISS LUCY ANN LOBDELL,William Klaber takes us on high-spirited journey of joy and hardship through a 19th century America that few of us could have ever imagined. Lucy Lobdell seems destined to live out a life of adventure from the moment she crosses over into a forbidden and secret world. Beautifully told, by the time I finished I felt I knew not only Lucy, but had a far better understanding of the America of her times. A first class novel about an truly unforgettable woman.” —Robert Hicks, New York Times bestselling author of The Widow of the South and A Separate Country

“William Klaber has created a complicated and heartbreaking heroine, or do I mean hero? Whether Lucy is living as a man or a woman, working as a music teacher or a hired gun, I was utterly absorbed in her adventures. A wonderful debut.” —Margot Livesey, author of The House on Fortune Street and The Flight of Gemma Hardy

“A superb novel. I feel as if I have walked through 19th century America at Lucy's side, celebrated and grieved with her. Klaber tells the story of her adventures with grace and invisible artistry. This is beautiful retelling of a remarkable story, and a fitting tribute to its subject.” —Imogen Robertson, author of The Paris Winter

“So dead-on it's uncanny . . . an early contender for the year's 'best' lists.” —Booklist, starred review