The Boy Who Drew Monsters: A Novel (Paperback) 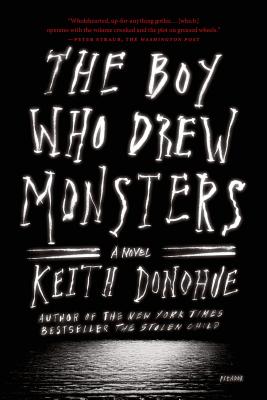 The Boy Who Drew Monsters: A Novel (Paperback)

From the New York Times bestselling author of The Stolen Child comes a "classically hypnotic horror story" (Time Out New York) about a young boy trapped inside his own world, whose drawings blur the lines between fantasy and reality.

Ever since he nearly drowned in the ocean three years earlier, ten-year-old Jack Peter Keenan has been deathly afraid to leave his home in a small coastal town in Maine. Instead, Jack Peter begins to draw monsters, and when those monsters take on a life of their own, no one is safe from the terror they inspire. His mother, Holly, begins to hear strange sounds in the night coming from the ocean. When she seeks answers from the local Catholic priest and his Japanese housekeeper, they fill her head with stories of shipwrecks and ghosts. His father, Tim, wanders the beach, frantically searching for a strange apparition running wild in the dunes. And the boy's only friend, Nick, becomes helplessly entangled in the eerie power of the drawings. While those around Jack Peter are haunted by what they think they see, only he knows the truth behind the terrors that lurk in the outside world.

Keith Donohue's The Boy Who Drew Monsters is a mesmerizing tale of psychological terror and imagination run wild.

Keith Donohue is the national bestselling author of the novels The Stolen Child, The Angels of Destruction, and Centuries of June. His work has been translated in two dozen languages, and his articles have appeared in The New York Times and The Washington Post, among other publications. A graduate of Duquesne University in Pittsburgh, Donohue also holds a Ph.D. in English from The Catholic University of America. He lives in Wheaton, Maryland.

“Clearly, we are in the territory of the wholehearted, up-for-anything gothic, which even as it undertakes a melancholic exploration of the lost, forlorn and bereft operates with the volume cranked and the plot on greased wheels. As a writer, Donohue always seems to know exactly what he is doing….and in The Boy Who Drew Monsters he twists the screw on Jack with the finesse of an expert. It is a pleasure to watch him glide along, pulling one squirming rabbit after another from his copious hat.” —Peter Straub, The Washington Post

“Ingenious ... Donohue unspools his simple story patiently, delivering jolts when necessary, but mostly concentrating on the stress generated in a family with an unhappy child. It's a modest novel, elegantly worked, with a nice chilly twist at the end.” —The New York Times Book Review

“[A] chilling Christmastime horror yarn ... Like a child's attention, the book may seem to wander in its final third before ultimately revealing itself to have been horribly on point all along.” —Entertainment Weekly

“It will raise the hairs on the back of your neck. Keith Donohue manages to peer into the darkest nightmares of childhood and beckon forth the monsters from the closet...Atmospheric and haunting. The Boy Who Drew Monsters is all the more chilling because it is grounded in real family life, with its heartbreaks and tenderness.” —Eowyn Ivey, New York Times bestselling author of The Snow Child

“Both an eerie, engrossing tale of the supernatural, with a sting in its tale, and a superb evocation of troubled youth. The Boy Who Drew Monsters reminds us that there is no rage like the rage of children...” —John Connolly, New York Times bestselling author of The Book of Lost Things and The Wolf in Winter

“An eerie, unsettling novel about the monsters outside your door...and the ones inside all of us. Donohue fills his pages with intimacy and dread, and whips up an ending that'll take your breath away.” —Christopher Golden, #1 New York Times bestselling author of Snowblind

“There are no monsters. That's what Jack Peter's parents tell him, and what I kept telling myself as I got sucked deeper and deeper into this delectably chilling novel. But still, as I read, I found myself looking out the window at shadows moving in the darkness, until finally I had to get up and flip on every light switch in the house. The Boy Who Drew Monsters left me breathless and reeling, questioning the line between what is real and what is imagined -- and realizing that the meeting of the two is where true terror dwells.” —Jennifer McMahon, New York Times bestselling author of The Winter People

“Keith Donohue has crafted a brooding, Serlingesque tale of tragedy, heartbreak, and the things that go bump in the night. Creepy, nostalgic, and understated, The Boy Who Drew Monsters is a tale meant for the dark of night, but most will want to enjoy it with all of the lights on.” —C. Robert Cargill, author of Dreams and Shadows

“This novel ranks with the best of modern-day supernatural thrillers.” —Bookreporter

“Donohue's (The Stolen Child, 2006, etc.) writing is as evocative as Jack Peter's drawings, both startling and heavy with emotion...A sterling example of the new breed of horror: unnerving and internal with just the right number of bumps in the night.” —Kirkus Reviews

“The ghostly influence of Henry James's The Turn of the Screw haunts this chilling novel by Donohue (The Stolen Child)… Donohue is an adept creator of atmosphere… A brisk and winningly creepy narrative.” —Publishers Weekly

“The novel unfolds through rich prose and a deeply imagined story. The final page--the final sentence, really--comes as a clever surprise, but one that resonates soundly. Fans of Donohue's first novel, The Stolen Child, will be pleased. Also recommended for readers of Joe Hill.” —Library Journal

“Keith Donohue evokes the otherworldly with humor and the ordinary with wonder.” —Audrey Niffenegger, author of The Time Traveler's Wife on Keith Donohue

“Utterly absorbing...A luminous and thrilling novel about our humanity.” —The Washington Post on The Stolen Child

“A wonderful, fantasy-laden debut...So spare and unsentimental that it's impossible not to be moved.” —Newsweek on The Stolen Child