Safekeeping: A Novel of Tomorrow (Paperback) 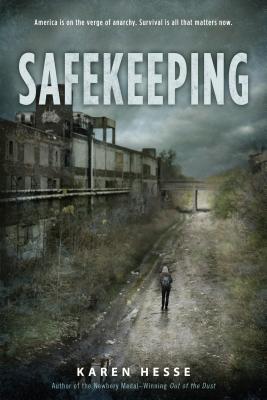 Safekeeping: A Novel of Tomorrow (Paperback)

“This book is not typical dystopian fare. The future is now. Radley, a volunteer at a Haitian orphanage, has rushed home to Vermont after hearing of political turmoil in the U.S. She is shocked by what greets her: restrictions, regulations, curfews, and crowds of armed soldiers patrolling the streets. Readers feel Radley's growing terror at a homeland that is nearly unrecognizable. The grimness of Radley's circumstance is countered by depictions of New England's stunning landscape with 50 photographs by Hesse illustrating the book. Safekeeping tackles timely issues that reflect the divisiveness in American politics. Not to be missed!”
— Christopher Rose, Andover Bookstore, Andover, MA

Radley's parents had warned her that all hell would break loose if the American People's Party took power. And now, with the president assassinated and the government cracking down on citizens, the news is filled with images of vigilante groups, frenzied looting, and police raids. It seems as if all hell has broken loose.

Coming back from volunteering abroad, Radley just wants to get home to Vermont, and the comfort and safety of her parents. Travel restrictions and delays are worse than ever, and by the time Radley's plane lands in New Hampshire, she's been traveling for over twenty-four hours. Exhausted, she heads outside to find her parents—who always come, day or night, no matter when or where she lands—aren't there.

Her cell phone is dead, her credit cards are worthless, and she doesn't have the proper travel papers to cross state lines. Out of money and options, Radley starts walking. . . .

Illustrated with 50 of her own haunting and beautiful photographs, this is a vision of a future America that only Karen Hesse could write: real, gripping, and deeply personal.

Karen Hesse is the author of many books for young people, including Out of the Dust, winner of the Newbery Medal, Letters from Rifka, Brooklyn Bridge, Phoenix Rising, Sable and Lavender. In addition to the Newbery, she has received honors including the Scott O’Dell Historical Fiction Award, the MacArthur Fellowship “Genius” Award and the Christopher Award, and was nominated for a National Jewish Book Award. Born in Baltimore, Hesse graduated from the University of Maryland. She and her husband Randy live in Vermont.

“The realistic treatment of the experiences of ordinary people in suddenly harsh circumstances makes for an absorbing character study, and the tale is suffused with an understated sadness and a vivid sense of place.” —BCCB

“Mature high school students will especially appreciate this book, perhaps as they embark on the next step in their journey of life.” —VOYA