Rhett Butler's People: The Authorized Novel based on Margaret Mitchell's Gone with the Wind (Paperback) 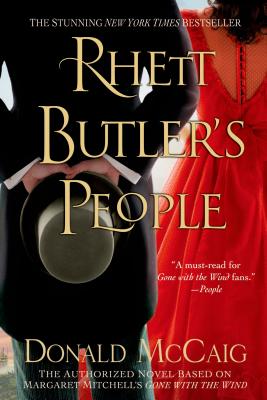 Rhett Butler's People: The Authorized Novel based on Margaret Mitchell's Gone with the Wind (Paperback)

Through the storytelling mastery of award-winning writer Donald McCaig, the life and times of the dashing Rhett Butler unfolds. Through Rhett's eyes we meet the people who shaped his larger than life personality as it sprang from Margaret Mitchell's unforgettable pages: Langston Butler, Rhett's unyielding father; Rosemary his steadfast sister; Tunis Bonneau, Rhett's best friend and a onetime slave; Belle Watling, the woman for whom Rhett cared long before he met Scarlett O'Hara at Twelve Oaks Plantation, on the fateful eve of the Civil War.

Of course there is Scarlett. Katie Scarlett O'Hara, the headstrong, passionate woman whose life is inextricably entwined with Rhett's: more like him than she cares to admit; more in love with him than she'll ever know…

Brought to vivid and authentic life by the hand of a master, Rhett Butler's People fulfills the dreams of those whose imaginations have been indelibly marked by Gone With The Wind.

Donald McCaig (1940-2018) is the award-winning author of Jacob’s Ladder, designated “the best civil war novel ever written” by The Virginia Quarterly. People magazine raved “Think Gone With the Wind, think Cold Mountain.” It won the Michael Shaara Award for Civil War Fiction and the Library of Virginia Award for Fiction. He was selected by the estate of Margaret Mitchell to write the Gone with the Wind follow up novels Rhett Butler's People and Ruth's Journey.

“Rhett Butler's People covers the period from 1843 to 1874, nearly two decades more than are chronicled in Gone With the Wind. Readers will...get inside Rhett's head as he meets and courts Scarlett O'Hara in one of the most famous love affairs of all time.” —The New York Times

“McCaig creates a convincing back story and has a real feel for men and the tensions between fathers, sons, friends and soldiers, as well as the nuances of Southern honor…The novel focuses on Rhett's point of view and explains exactly where he got his dash.” —USA Today

“A must-read for Gone with the Wind fans.” —People

“Rhett Butler's People broadens the canvas, giving Rhett new dueling and blockade-running adventures, and adding intriguing characters like Confederate cavalier-turned-Klansman Andrew Ravanel, a rancid version of Ashley Wilkes who romances Rhett's sister, Rosemary. McCaig paints a richer, darker panorama of a Civil War-era South, where poor whites seethe with resentment, and slavery and racism are brutal facts of life that an instinctive gentleman like Rhett can work around but not openly challenge. McCaig thus imparts a Faulknerian tone to the saga that sharpens Mitchell's critique of Southern nostalgia without losing the epic sweep and romantic pathos. The result is an engrossing update of Gone With the Wind that fans of the original will definitely give a damn about.” —Publishers Weekly

“Read with eloquence, charisma and a bit of spontaneity tossed by John Bedford Lloyd...With a profusion of drama, action, romance and tragedy, Lloyd gets it right every time and never fails to convey the underlying tension throughout.” —PW, Starred Review

“McCaig has taken on a monumental task in attempting to augment the mythology of such a well-loved story…While remaining largely faithful to Mitchell's framework, he has made the story of Butler his own.” —The Post and Courier (Charleston, SC)

“In Gone With the Wind, Butler was mysterious, and that added to his allure. Here, we learn more about his background: about his harsh, unforgiving father; his long-suffering mother; his own wild ways. In some ways, this Rhett is a kinder, gentler sort than the one readers loved…” —Tampa Tribune