Once We Were Brothers: A Novel (Liam Taggart and Catherine Lockhart #1) (Paperback) 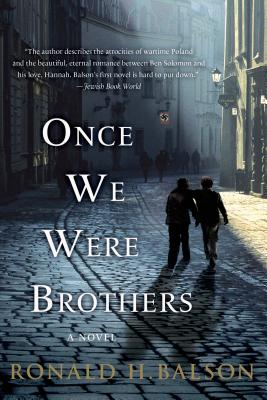 Once We Were Brothers: A Novel (Liam Taggart and Catherine Lockhart #1) (Paperback)

The gripping tale about two boys, once as close as brothers, who find themselves on opposite sides of the Holocaust.

"A novel of survival, justice and redemption...riveting." —Chicago Tribune, on Once We Were Brothers

Elliot Rosenzweig, a respected civic leader and wealthy philanthropist, is attending a fundraiser when he is suddenly accosted and accused of being a former Nazi SS officer named Otto Piatek, the Butcher of Zamosc. Although the charges are denounced as preposterous, his accuser is convinced he is right and engages attorney Catherine Lockhart to bring Rosenzweig to justice. Solomon persuades attorney Catherine Lockhart to take his case, revealing that the true Piatek was abandoned as a child and raised by Solomon's own family only to betray them during the Nazi occupation. But has Solomon accused the right man?

Once We Were Brothers is Ronald H. Balson's compelling tale of two boys and a family who struggle to survive in war-torn Poland, and a young love that struggles to endure the unspeakable cruelty of the Holocaust. Two lives, two worlds, and sixty years converge in an explosive race to redemption that makes for a moving and powerful tale of love, survival, and ultimately the triumph of the human spirit.

RONALD H. BALSON is an attorney, professor, and writer. His novel The Girl From Berlin won the National Jewish Book Award and was the Illinois Reading Council's adult fiction selection for their Illinois Reads program. He is also the author of Defending Britta Stein, Eli’s Promise, Karolina's Twins, The Trust, Saving Sophie, and the international bestseller Once We Were Brothers. He has appeared on many television and radio programs and has lectured nationally and internationally on his writing. He lives in Chicago.

“This is as compelling a story as you would ever want to read...This book is different in its passion and its presentation. It is worth your time and you won't be disappointed. Once We Were Brothers is a new look at an old story, and it will stay with you long after you have finished it.” —Jackie K Cooper, Huffington Post

"A novel of survival, justice and redemption... riveting." —Chicago Tribune, on Once We Were Brothers

“The phenomenal triumph of lawyer-author John Grisham's legal thrillers has spawned surprisingly few successful emulators; however, Chicago attorney Balson's first novel, while featuring a young lawyer heroine, Catherine Lockhart, who sees her bar admission as a license to further justice, is no simple imitation of Grisham's entertaining potboilers..., this novel is uplifting and moving, intelligently written and featuring historically accurate context and an unusual insight into human character and motivations. Highly recommended for all readers.” —Library Journal (starred)

“Balson does a number of things superbly: he crafts a highly readable plotline and makes great use of the Chicago backdrop…many will enjoy this gripping novel for its narrative drive and its emotional storytelling.” —Booklist

“The author describes the atrocities of wartime Poland and the beautiful, eternal romance between Ben Solomon and his wife, Hannah. Balson's first novel is hard to put down.” —The Jewish Book World

“A legal thriller...a reader knows he's writing from the inside. ” —Chicago Jewish Star