A Skeptic's Guide to the Mind: What Neuroscience Can and Cannot Tell Us About Ourselves (Paperback) 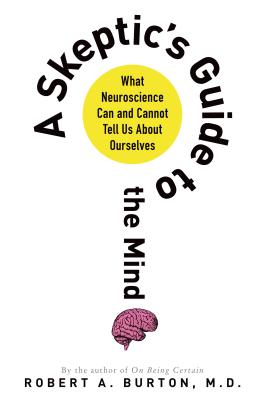 A Skeptic's Guide to the Mind: What Neuroscience Can and Cannot Tell Us About Ourselves (Paperback)

By Robert A. Burton

What if our soundest, most reasonable judgments are beyond our control?

Despite 2500 years of contemplation by the world's greatest minds and the more recent phenomenal advances in basic neuroscience, neither neuroscientists nor philosophers have a decent understanding of what the mind is or how it works. The gap between what the brain does and the mind experiences remains uncharted territory. Nevertheless, with powerful new tools such as the fMRI scan, neuroscience has become the de facto mode of explanation of behavior. Neuroscientists tell us why we prefer Coke to Pepsi, and the media trumpets headlines such as "Possible site of free will found in brain." Or: "Bad behavior down to genes, not poor parenting."
Robert Burton believes that while some neuroscience observations are real advances, others are overreaching, unwarranted, wrong-headed, self-serving, or just plain ridiculous, and often with the potential for catastrophic personal and social consequences. In A Skeptic's Guide to the Mind, he brings together clinical observations, practical thought experiments, personal anecdotes, and cutting-edge neuroscience to decipher what neuroscience can tell us – and where it falls woefully short. At the same time, he offers a new vision of how to think about what the mind might be and how it works.
A Skeptic's Guide to the Mind is a critical, startling, and expansive journey into the mysteries of the brain and what makes us human.

Robert Burton, M.D. graduated from Yale University and University of California at San Francisco medical school, where he also completed his neurology residency. At age 33, he was appointed chief of the Division of Neurology at Mt. Zion-UCSF Hospital, where he subsequently became Associate Chief of the Department of Neurosciences. His non-neurology writing career includes three critically acclaimed novels. He is the author of On Being Certain and A Skeptic's Guide to the Mind. He lives in Sausalito, California.

“Written in a relatable style that balances hard science with philosophy and speculation, Burton's project is . . . to emphasize that 'a humble acknowledgement of the limits of inquiry should be the first step in the study of the mind.' It's an important point.” —Publishers Weekly

“Burton does an excellent job retracing the history of neuroscience studies and directing readers' attention to future discoveries. He takes an unbiased look at the fundamentals of the field, and posits that, no matter how much the field advances, slippery notions of consciousness and moral decision-making will always allow for some amount of speculation. Recommended for skeptics and enthusiasts alike.” —Library Journal

“The neurologist Robert Burton is skeptical, to say the least. His new book, "A Skeptic's Guide to the Mind," is a scathing indictment of reductionism in all its guises, and a stirring call to consider whether scientists are even asking the right kinds of questions.” —Salon.com

“An excursion into the choppy waters of intelligence, consciousness, and language. It is, Burton says, ‘best read as a late-night meditation', which might explain his slightly circular thesis: that our innate irrationality, revealed by neuroscience, has itself led neuroscientists astray in their attempts to understand the mind. For the most part, his conclusions are spot on.” —New Scientist

“Burton is no defeatist; he's a skeptic with something to offer beyond criticism. While reading this book, you're likely to learn more about what we do know about our elusive brains – and what we can reasonably argue about the mind – than from most others on the shelf.” —Forbes.com

“Covers such topics as the brain's role in 'out-of-body' experiences and the lingering effects of limb amputations. It also examines the latest neurological research, which Burton argues is often overstated by the media.” —Washington Post

“Neuroscientists themselves are like any author: They bring their own prejudices, needs, hopes and dreams to their work. Because their data is highly susceptible to interpretation, you need to understand who they are, where they come from and what personal slant they bring to that data before you believe any of it.” —CBS.com

“Sharply guides us through a litany of initially promising, but eventually debunked, research and illuminating examples countering the conventional wisdom that humans occupy a special place in the animal world because of the uniqueness of their ‘mind.' It is a book that should give philosophers, psychologists and neuroscientists reason for pause.” —Marin Independent Journal

“This is heady stuff. It challenges our preconceptions. It is packed with the results of intriguing scientific experiments that raise more questions than they answer. The committee in my brain passed on a strong "thumbs up" vote to my conscious mind.” —Science-Based Medicine

“Burton's tour through the latest brain research demolishes certainty like a daisy-cutter bomb. By the time he points to a study indicating that brain images themselves are a potent factor in convincing people of neuroscience's new claims - our brains are impressed by the elegant shapes and ethereal colours - he has us. We have seen the pattern, even if Burton keeps begging us to distrust it.” —Maclean's

“A Skeptic's Guide to the Mind is a gripping and timely book. With an engaging blend of data and cases, neurologist Robert Burton delivers an important warning that there is often more to neuroscience than meets the eye, and shares surprising insights about how our minds really work. You will never look at the space between your ears in the same way.” —Adam Grant, author of Give and Take

“Robert Burton's Skeptics Guide provides a thoughtful meditation on the mismeasure of mind. With a rich tapestry of neurological case studies, allusions to film and literature, compelling personal stories, and challenging thought experiments, Burton describes the abundant philosophical and scientific challenges to the belief that we know -- or even that we can know -- our own minds.” —Daniel Simons, New York Times bestselling co-author of The Invisible Gorilla: How Our Intuitions Deceive Us

“A Skeptic's Guide to the Mind is a unique combination of science and thought-provoking criticism. I highly recommend it to everyone who is fascinated by the mystery of how our brains make us who we are.” —Ginger Campbell, M.D., author of Are You Sure? The Unconscious Origins of Certainty and host of the Brain Science podcast

“There is no bigger challenge to our self-understanding than the exploding field of neuroscience, but if we are to benefit from its discoveries, we must learn how to think about them in the right way. And at the moment, we don't. Thus far, neuroscience research has been oversold by scientists themselves and overhyped by journalists. We have to do better. In A Skeptic's Guide to the Mind, Robert Burton does a beautiful job explaining what modern neuroscience has to offer, and just as important, what it doesn't, and probably can't have to offer. A careful reading of this well-written book will go a long way toward enabling us to draw the right lessons from what neuroscience has to offer.” —Barry Schwartz, author of The Paradox of Choice and Practical Wisdom

“Burton questions the fundamental assumptions of his field – with A Skeptics Guide to the Mind, he takes on the very foundations of cognitive science, leading readers to valuable insights in the process.” —Vinod Khosla, co-founder of Sun Microsystems

“This engaging book captures the strengths and limitations of modern neuroscience in unlocking the secrets of mind and brain. It stands alone. In a style that joins academic writing, case histories, and narrative, Burton brings the reader to the many places where person and identity, self and society, health and disease, and, most pointedly, where scientist and social responsibility meet.” —Judy Illes, author of the Oxford Handbook of Neuroethics and Professor of Neurology and Canada Research Chair in Neuroethics at the University of British Columbia

“In recent years, there's been a lot of neurotrash infecting everything from economics, business and ethics to romance, gastronomy and parenting. At last, Robert Burton, with the knowledge and wisdom to tackle the subject head-on, dares to separate nonsense from wisdom. With the delicacy of a philosopher and the real life expertise of a physician, he dares to show us how much we've learned but also how much we have to discover. This is one of the most elegant combinations of science and life I've come across for a long time.” —Margaret Heffernan, author of Willful Blindness

“Popular media is awash in an endless deluge of neuroscience findings--particularly those that imply neuroscience is the new arbiter of "truth" for everything from why we like certain colors to whether someone is lying on the witness stand. Readers on the receiving end of neuro-mania are left confused about what to believe, which is why Robert Burton's A Skeptic's Guide to the Mind: What Neuroscience Cannot Tell Us About Ourselves is such a valuable addition to the library of anyone interested in cognitive science. Burton cuts through the clutter and incisively reveals what the current state of neuroscience is truly capable of telling us about ourselves. It's a top-tier contribution from one of the leading minds in the field.” —David DiSalvo, author of What Makes Your Brain Happy and Why You Should Do the Opposite

“Neuroscientific high jinks of the best sort. A salutary reminder that we only understand 10% of our brains.” —Nick Humphrey, author of Soul Dust, The Magic of Consciousness, and Emeritus Professor of Psychology, London School of Economics