Trap the Devil: A Thriller (A Dewey Andreas Novel #7) (Hardcover) 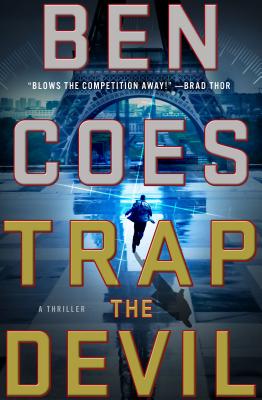 By Ben Coes
Please email or write store for pricing and availability information.
Hard to Find

"Intense and gripping...Coes' name should be on the lips of every reader who enjoys Vince Flynn and the Brads (Taylor and Thor)." —Booklist (starred review) on Trap the Devil

Only one man stands between a powerful cabal planning an invisible coup of the U.S. government and their brutal goals—Dewey Andreas.

A group of some of the most powerful people in the government, the military, and the private sector, has begun a brutal plan to quietly take over the reins of the U.S. government. They’ve begun to remove the people who stand in their way—and replace them with their own sympathizers and puppets. They’ve already taken out the Speaker of the House—whose death was made to look like an accidental drowning—and the president and vice president are next. Once they have their own people in place, they plan to start a bloody, brutal war on an unimaginable scale.

On restricted duty while he recovers from injuries incurred on a previous mission, Dewey Andreas is sent to Paris by CIA Director Hector Calibrisi. The Secretary of State is going there for secret talks, and Dewey is to be an extra layer of security above the State Department team. But what should be an easy mission couldn’t go more wrong. The cabal has sent in a hit man to take out the Secretary of State and lay the blame for this murder at the feet of Dewey himself.

With the Secretary of State dead, shot by Dewey’s weapon, Dewey is on the run and out in the cold, desperately trying to unravel the plot before the conspirators succeed in killing millions of innocents.

BEN COES is the author of the critically acclaimed Power Down and Coup d’Etat. He is a former speechwriter for the George H .W. Bush White House, worked for Boone Pickens, was a fellow at the JFK School of Government at Harvard, a campaign manager for Mitt Romney’s run for governor in 2002, and is currently a partner in a private equity company out of Boston. He lives in Wellesley, Mass.

"Read Trap the Devil and see why readers who are in the know consider Ben Coes the contemporary master of thriller authors." —Bookreporter

"An intriguing interlacing of narratives emerges as past and present enemies come together against Dewey and his team." —Kirkus Reviews

“While the nonstop action is the main course here, the complex, thought-provoking plot and character development prove to be the cherry on top to Coes’ relentless, adrenaline-pumping thriller… Trap the Devil elevates Ben Coes to the very top of the thriller genre, where he sits alongside the likes of Brad Thor, Daniel Silva, and the late Vince Flynn.” —The REAL Book Spy

"Outstanding!...The pages fly, and the surprises are numerous. Coes is one of those few authors who knows how to turn the world of black ops into compelling, realistic fiction, and he’s getting better and better." —Booklist (starred review) on First Strike

"Independence Day may well be the best installment of the series to date... There’s enough action, explosions, fatalities and (best of all) intelligence nuggets to fill a summer’s equivalent of books.... Strongly recommended, from first page to last." —Bookreporter

"Coes is in the same league as Brad Thor and Vince Flynn, and this high-octane race against time will have plot-driven thriller readers unable to turn the pages fast enough."—Booklist (starred review) on Independence Day

"Ben Coes has created a hero who ranks with the protagonists in a Vince Flynn or Brad Thor thriller... The Last Refuge is a winner and will keep readers turning the pages." —The Associated Press

"My favorite novel in at least a decade. The writing was inherently masculine, brilliantly crafted." —Huffington Post on The Last Refuge