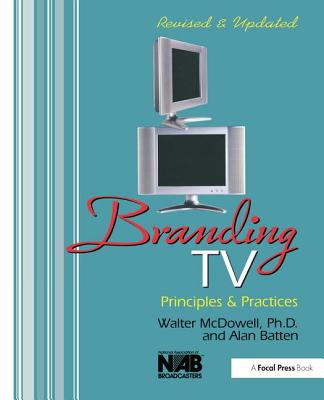 In an effort to halt increasing media competition and decreasing audience shares, Branding has become the new mantra among television station and network executives. Branding TV: Principles and Practices second edition goes beyond the jargon of branding to explain the essential principles underlying successful branding and offers many practical strategies to measure, build and manage television brand equity. For instructional purposes, the book pays particular attention to the local commercial TV station and its news franchise.

Written by broadcast professionals with years of experience, this book shows how the notions of branding are no more prevalent than in the battle for dominance in local news. The practical suggestions in the book will help the savvy manager understand and take advantage of branding in their efforts to move their property to the forefront in the marketplace.
Before entering academia, Professor McDowell spent over two decades in commercial television, including station management positions in promotion, programming, and creative services. After earning his doctorate in from the University of Florida, and teaching for several years at Southern Illinois University, he joined the faculty of the School of Communication at the University of Miami in 2001. In addition to teaching various media management courses, Professor McDowell has published media branding studies in several academic publications including The Journal of Media Economics, and the International Journal on Media Management. A nationally known consultant, he also has authored two books published by the National Association of Broadcasters and Focal Press Branding TV: Principles and Practices (with Alan Batten) and Troubleshooting Audience Research.Alan Batten graduated from the University of Maryland (College Park) and undertook postgraduate work at Boston University's School of Public Communications. He has been active in the broadcast industry since 1971 where he had the opportunity to lead the marketing efforts of several stations affiliated with NBC, ABC, CBS, FOX and PBS. Along the way, he served as President of the Broadcast Promotion and Marketing Executives (now known as PROMAX). He has received countless industry awards and presented numerous international lectures on various aspects of broadcast marketing. In 1991, he founded ABCommunications to provide consulting services for marketing challenges. ABCommunications counts as clients such industry giants as Sinclair Broadcast Group, Universal Pictures, ACT III Broadcasting, and Raycom Sports. A writer at heart, he has written several motion picture and television scripts and enjoys producing radio commercials.