The New Builders: Face to Face with the True Future of Business (Hardcover) 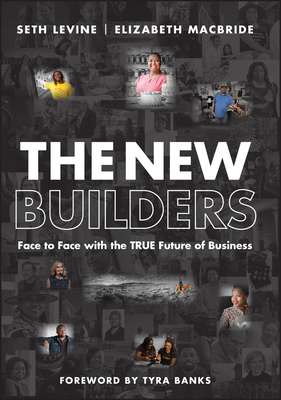 Despite popular belief to the contrary, entrepreneurship in the United States is dying. It has been since before the Great Recession of 2008, and the negative trend in American entrepreneurship has been accelerated by the Covid pandemic. New firms are being started at a slower rate, are employing fewer workers, and are being formed disproportionately in just a few major cities in the U.S. At the same time, large chains are opening more locations. Companies such as Amazon with their deliver everything and anything are rapidly displacing Main Street businesses.

In The New Builders, we tell the stories of the next generation of entrepreneurs -- and argue for the future of American entrepreneurship. That future lies in surprising places -- and will in particular rely on the success of women, black and brown entrepreneurs. Our country hasn't yet even recognized the identities of the New Builders, let alone developed strategies to support them.

Our misunderstanding is driven by a core misperception. Consider a typical American entrepreneur. Think about the entrepreneur who appears on TV, the business leader making headlines during the pandemic. Think of the type of businesses she or he is building, the college or business school they attended, the place they grew up.

The image you probably conjured is that of a young, white male starting a technology business. He's likely in Silicon Valley. Possibly New York or Boston. He's self-confident, versed in the ins and outs of business funding and has an extensive (Ivy League?) network of peers and mentors eager to help his business thrive, grow and make millions, if not billions.

In a few years, we believe women will make up more than half of the entrepreneurs in America.

The age of the average American entrepreneur also belies conventional wisdom: It's 42. The average age of the most successful entrepreneurs -- those in the top .01% in terms of their company's growth in the first five years -- is 45.

These are the New Builders. Women, people of color, immigrants and people over 40.

We're failing them. And by doing so, we are failing ourselves.

In this book, you'll learn:

What we can do to turn the decline in entrepreneurship around, especially be supporting the people who are courageously starting small companies today.

Seth Levine A long-time venture capitalist Seth Levine works with venture funds and companies around the globe. His day job is as a partner at Foundry Group, a Boulder, CO based venture capital firm he co-founded in 2006 which as of the end of 2020 had almost $3 billion in assets under management. Easily distracted and a passionate advocate for entrepreneurship, Seth also spends time as an advisor to venture funds and companies around the world.The intersection of community and business has always been a driving force for Seth. He co-founded Pledge 1%, a global network of companies who have pledged equity, time, and product back to their local communities. He is on the board of StartupColorado, which promotes entrepreneurship in areas of Colorado outside of the front range. He is also a Trustee of Macalester College in St. Paul, MN, where he helped found their entrepreneurship program as well as a popular student hackathon (the Macathon). He also works with a number of funds and companies - especially in the Middle East and Africa - to help promote entrepreneurship and economic development.A passionate cyclist, above-average skier, and general fan of all things outdoors, Seth lives in Colorado with his wife Greeley and their three children. The New Builders is his first book, but you can find more of his writing at sethlevine.com. Elizabeth MacBride As an international business journalist for outlets including CNBC, BBC, MIT Tech Review and Quartz, Elizabeth MacBride discovered a global movement of people who believe in the life-altering power of entrepreneurship. It is a path to agency, and as tech innovation continues to even the playing field, a viable path to create whole economies. Elizabeth reported from Cambodia, Dubai, Jerusalem and Wales, among many other places, to capture the story of this global movement.A military brat with a deep empathy for outsiders, Elizabeth also saw how unfairly the deck was stacked against people who weren't in powerful positions to begin with -- those who didn't come from money, or who lived outside of big cities. The situation is especially pernicious against women and people of color, who are subject to systems that don't serve them well. She founded a new publication, Times of Entrepreneurship, to share the stories of those often-overlooked entrepreneurs.She's also been an entrepreneur herself as co-founder of RIABiz.com and 200kfreelancer.com, and she was part of the founding team of Wealthfront, the first online investment advisor. Some of her writing and editing clients over the years have included Stanford GSB, the U.N.'s Office of the Quartet in Jerusalem, Charles D. Ellis and Abigail Disney. In 2020, she was journalist-in-residence at MIT's Legatum Center for Development & Entrepreneurship.A writer, traveler and seventh-generation Washingtonian, she lives in Alexandria, Va., with her two daughters.