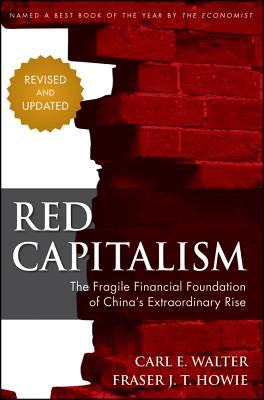 How did China transform itself so quickly? In Red Capitalism: The Fragile Financial Foundation of China's Extraordinary Rise, Revised Edition Carl Walter and Fraser Howie go deep inside the Chinese financial machine to illuminate the social and political consequences of the unique business model that propelled China to economic powerhouse status, and question whether this rapid ascension really lives up to its reputation.

All eyes are on China, but will it really surpass the U.S. as the world's premier global economy? Walter and Howie aren't so certain, and in this revised and updated edition of Red Capitalism they examine whether or not the 21st century really will belong to China.

Indispensable reading for anyone looking to understand the limits that China's past development decisions have imposed on its brilliant future, Red Capitalism is an essential resource for anyone considering China's business strategies in today's extremely challenging global economy.

Carl E. Walter lived in China for twenty years and actively participated in numerous financial reforms. He played a major role in China's groundbreaking first overseas IPO in 1992, as well as the first listing of a state-owned enterprise on the New York Stock Exchange in 1994. He was a member of the Management Committee at China International Capital Corporation, China's first and most successful joint venture investment bank, where he supported a number of significant domestic stock and debt underwritings for major Chinese corporations. More recently, he helped build one of the most successful and profitable domestic security and currency trading operations for a major global investment bank. Fluent in Mandarin, he holds a PhD from Stanford University and a graduate certificate from Beijing University. He currently lives in New York where he acts as an independent consultant. Fraser J. T. Howie studied Natural Sciences (Physics) at Cambridge University and Chinese at Beijing Language and Culture University. For nearly twenty years he has been trading, analyzing, and writingabout Asian stock markets. During that time he has worked in Hong Kong, trading equity derivatives at Bankers Trust and Morgan Stanley. After moving toChina in 1998, he worked in the sales andtrading department of China International Capital Corporation followed by a stint with China M&A Management Company. He has contributed to the SCMP, AWSJ, China Economic Quarterly, and China Economic Review as well as being a regularChina commentator on CNBC, BBC, Al Jazeera, and Bloomberg. Currently, he is a Managing Director at a leading Asia Pacific Brokerage firm in Singaporehelping international investors invest in both the Indian and Chinese markets.