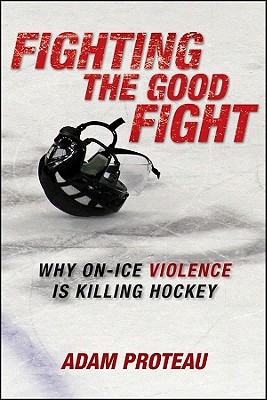 By Adam Proteau
$21.95
Special Request - May Not Be Available

Whether it's on-ice fist fights or head shots into the glass, hockey has become a nightly news spectacle--with players pummeling and bashing each other across the ice like drunken gladiators. And while the NHL may actually condone on-ice violence as a ticket draw, diehard hockey fan and expert Adam Proteau argues against hockey's transformation into a thuggish blood sport. In "Fighting the Good Fight, " Proteau sheds light on the many perspectives of those in and around the game, with interviews of current and former NHL stars, coaches, general managers, and league executives, as well as medical experts.

One of the most well-known media figures on the hockey scene today, famous for his funny, feisty observations as a writer for the "Toronto Star" and "The Hockey News" and commentator on CBC radio and TV, Adam Proteau is also one of the few mainstream media voices who is vehemently anti-fighting in hockey. Not only is his book a plea to the game's gatekeepers to finally clamp down on the runaway violence that permeates the sport even at its highest level, he offers realistic suggestions on ways to finally clean the game up.Includes interviews with medical experts on head injuries and concussions, as well as with other members of the mediaThe author not only wages an attack on the value of fighting in hockey--but also on the establishment hockey culture

Covering the most polarizing issue in hockey today, "Fighting the Good Fight" gives hockey fans and sports lovers everywhere a reason to stamp their feet and whistle--at a rare display of eloquence and common sense.

Adam Proteau has made a name for himself in the hockey world thanks to more than a decade of feisty, funny observations about the game. In addition to his job as a columnist for "The Hockey News," his work has appeared in the "Globe and Mail," the "Toronto Star," and on websites ESPN.com, FoxSports.com, MSNBC.com, Sympatico.ca and many others. He also appears regularly as an analyst on national news networks, sports talk radio stations across North America, and as a regular panelist on the popular Canadian TV show "Off the Record." He is a member of the Professional Hockey Writers' Association; in 2006, he won the PHWA's award for best column.