Grasp: The Science Transforming How We Learn (Paperback) 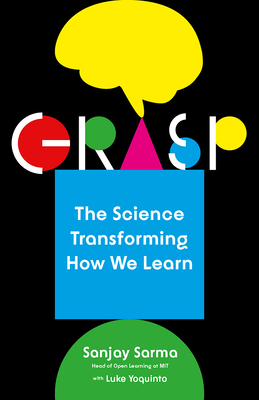 Grasp: The Science Transforming How We Learn (Paperback)


Available to Order - Usually Arrives in Our Store in 4 to 7 Days
How do we learn? And how can we learn better?

In this groundbreaking look at the science of learning, Sanjay Sarma, head of Open Learning at MIT, shows how we can harness this knowledge to discover our true potential. Drawing from his own experience as an educator as well as the work of researchers and innovators at MIT and beyond, in Grasp, Sarma explores the history of modern education, tracing the way in which traditional classroom methods—lecture, homework, test, repeat—became the norm and showing why things needs to change.

The book takes readers across multiple frontiers, from fundamental neuroscience to cognitive psychology and beyond, as it considers the future of learning. It introduces scientists who study forgetting, exposing it not as a simple failure of memory but as a critical weapon in our learning arsenal. It examines the role curiosity plays in promoting a state of “readiness to learn” in the brain (and its troublesome twin, “unreadiness to learn”). And it reveals how such ideas are being put into practice in the real world, such as at unorthodox new programs like Ad Astra, located on the SpaceX campus.

Along the way, Grasp debunks long-held views such as the noxious idea of “learning styles,” equipping readers with practical tools for absorbing and retaining information across a lifetime of learning.
Sanjay Sarma is the head of Open Learning at MIT. A professor of mechanical engineering by training, he has worked in the fields of energy and transportation, computational geometry, and computer-assisted design, and has been a pioneer in RFID technology. He has an undergraduate degree from IIT Kanpur as well as advanced degrees from Carnegie Mellon and the University of California, Berkeley.

Luke Yoquinto is a science writer who covers learning and education, as well as aging and demographic change, in his role as a researcher at the MIT AgeLab. His work can be found in publications such as The Washington Post, Slate, The Wall Street Journal, and The Atlantic. He is a graduate of Boston University’s science journalism program.

“Compelling. . . . Delightful as well as convincing in its plea that educators place learning over winnowing and access over exclusivity.” —Kirkus Reviews (starred review)

“A remarkable book, both lively and scholarly. I strongly recommend it for anyone interested in the history of ideas about learning and interested in improving teaching and learning.” —Henry L. Roediger III, coauthor of Make It Stick

“An amazing book . . . The authors provide an overview of the neural and cognitive processes that support learning . . . They make a convincing case that students have an amazing capacity to learn.” —Robert A. Bjork, Distinguished Research Professor of Psychology, UCLA

“Grasp is an absolute pleasure to read. . . . An important contribution to the literature on learning science and higher education change. . . . Grasp can provide the foundations of what learning science-informed teaching might look like, with some fantastic real-world examples.” —Joshua Kim, Inside Higher Ed

“Sarma's book may be the most important work on education written this century.” —Chris Edwards, The Skeptic