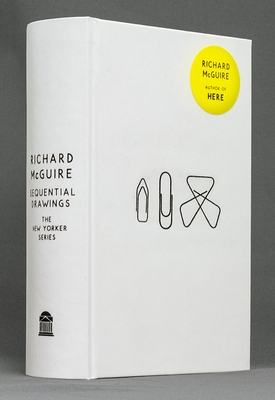 By Richard McGuire, Luc Sante (Introduction by)
$25.00
Available to Order - Usually Arrives in Our Store in 4 to 7 Days

From the author of the widely acclaimed graphic novel Here, awarded the 2016 Prix D'or for best graphic album at Angoulême, a new graphic work that celebrates another aspect of his incomparable genius.

Sequential Drawings gathers together more than a decade of McGuire's witty and endlessly inventive spots—a veritable short-story collection—each drawing given its own spread, which, in turn, assures for the reader the experience of surprise and delight that the drawings unfailingly deliver. Richard McGuire's first series of "spot" drawings debuted in The New Yorker in February 2005 for the magazine's 80th anniversary issue. Spot drawings, scattered among the magazine's text, had been a long-running feature of The New Yorker, and over the years, many artists had contributed them. But McGuire was the first to conceive them as a sequence, and his drawings were something altogether new: deceptively simple images that imbued the series with movement and narrative, telling their own unexpected stories.

(In a 3-7/8 x 5-7/8 trim size. With illustrations throughout and an introduction by Luc Sante)

RICHARD McGUIRE is a regular contributor to The New Yorker. His comics have appeared in The New York Times, McSweeney’s, Le Monde, and Libération. He has written and directed two omnibus feature films: Loulou et Autre Loups (Loulou and Other Wolves, 2003), and Peur(s) du Noir (Fear[s] of the Dark, 2007). He designed and manufactured his own line of toys, and is the founder and bass player of the band Liquid Liquid. Here was based on his six-page comic that appeared in RAW magazine in 1989 and was quickly acknowledged as a transformative work that expanded the possibilities of the comics medium.

“McGuire’s singular, virtuoso approach to storytelling is again the star....McGuire has given us another original and pleasurable work, as freewheeling, artful and exuberant as the artist himself.” —James Yeh, The New York Times

“Spot drawings are small, and McGuire’s combine the clean lines of comic art, the charm of a good idea, the pleasure of scientific observation, and a hint of story. In each drawing, and in each sequence, there are observations and connections that delight….Why are the drawings so appealing? Because they pay close attention to detail, to the many ways in which humans have invented small, useful things, and because they’re drawn simply and gracefully, with what feels like affection, despite being almost exactly realistic….Removed from the text in which they first appeared, [the spots] allow us to focus on the delicious works of art that they are—subtle, rewarding stories that once complemented other stories….Excellent.” —Sarah Larson, The New Yorker