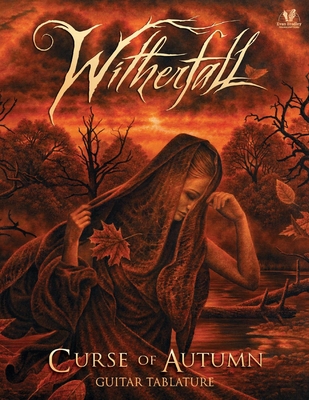 
Available to Order - Usually Arrives in Our Store in 4 to 7 Days
Learn to Play the entire Witherfall Album Curse of Autumn. The book includes all guitar parts transcribed including Leads. Also has the corresponding lyrics so you can easily follow along and find your place within the song.
WITHERFALL are unstoppable! The dark melodic heavy metal juggernaut from Los Angeles are blazing new trails and weaving new tales on spectacular new album, Curse of Autumn. Although two years separate WITHERFALL's third opus from their celebrated A Prelude to Sorrow album, it feels like a long time. Even with the Vintage EP bridging the gap, the wait has been cruel. Well, WITHERFALL legions the tease of what's to come is out there. Fronted by a riveting, high-budget Zev Deans (Ghost, Behemoth) video for "As I Lie Awake," a visualizer video for "The Last Scar," and the premiere of the utterly wild "Another Face," the Curse of Autumn finds vocalist/keyboardist Joseph Michael (Sanctuary), guitarist Jake Dreyer (Iced Earth), bassist Anthony Crawford (Chon), and drummer Marco Minnemann (The Aristocrats) with a genuine metal classic in their collective midst.


"We wanted to out-do ourselves on Curse of Autumn," guitarist/songwriter Jake Dreyer says. "That's really it. We brought on Jon Schaffer to produce. He wanted a heavy, dynamic sound for Curse of Autumn. The guitar tracks alone are way more insane than anything we've ever really done. We also had Jim Morris come in. He's a legend in the engineering field. He's such a pro that it made everything smooth for us. Then, we had Tom Morris do the mastering. Having Kristian do the cover again completed the cycle. We're creating our own little world with Kristian. The visual aspect works so well with the music we're creating."


"We want everything we do in WITHERFALL to be its own piece of art," adds singer/songwriter Joseph Michael. "The paintings are commissioned by us and therefore serve a symbolic purpose. Our merchandise also has equal importance to us. We're not a slap-on-a-logo type band. We want to put stuff out into the world that we would want. For instance, we put out sheet music, we've released our own wine, called Tempest Red Blend, and we spend a lot of time on the packaging of our albums. I mean, look at Ghost. They do merch very well. They have an art to what they do—a verifiable aesthetic. Look at Ghost's 'Dance Macabre' video. You can tell it's Ghost right away, but it's also cool to watch over and over. The song becomes something else with the video. That's exactly what we were looking for when we did the video for 'As I Lie Awake.'"


The level up, so to speak, is evident from the moment the Curse of Autumn comes into view. Whether it's with WITHERFALL's first-rate video output and superlative production crew or Kristian Wåhlin's (King Diamond, Dissection) enchanting cover piece and accomplished studio musicians (featuring drummer Marco Minnemann and percussionist James "Timbali" Cornwell), WITHERFALL have pushed the edges of every boundary on Curse of Autumn. Where it matters most is in the songwriting, however. Michael and Dreyer spent the better part of the last two years writing, refining and perfecting their distinguished and musically-adept dark melodic heavy metal. Tracks like the thunderous "The Last Scar," the dramatic "Another Face," the somber "The River," and the group's Miltonian epic "…And They All Blew Away" are pedestaled to the highest standards. But it might be the heartfelt cover of Boston's "Long Time" that seals the greatness that is the Curse of Autumn. Jake Dreyer is the lead guitarist for the band Iced Earth and lead guitarist/songwriter for the Progressive Metal band Witherfall. He is the former studio and touring session guitarist for the bands White Wizzard and Kobra and the Lotus. In the Spring of 2011, Dreyer released his debut solo EP "In the Shadows of Madness" showcasing his many years of study under such masters as Chris Broderick (Megadeth, Ex-Jag Panzer, Nevermore), David "The Shred Demon" Shankle (DSG, Ex-Manowar), and Rusty Cooley (Outworld). Throughout his many years of playing, Jake has performed hundreds of shows in front of thousands of people all over the world and has recorded four full length albums and four EP's with his various projects over the years.

Jake began taking lessons at the tender age of 8 years old and formed his first band, "Stealth" at the age of 11. By the time he was 13 he had professionally recorded his first album and opened up for Lou Gramm of Foreigner and John Waite of The Babys.

At the age of 14, Dreyer was introduced to the music of Yngwie J. Malmsteen. This started a total transformation of Dreyer's approach and outlook on music. Jake soon started practicing more (4-5 hours a day) and focused on various guitar techniques. That summer he attended NGW (National Guitar Workshop), studying under Terry Syrek. During this time Dreyer formed a new band, "Fatal Chaos". This led to recording a 3 song E.P, winning Stoli/Budweisers best guitarist of the year, and performing all over the Southeastern United States.

Toward the end of 2007 Jake formed the melodic metal band "DeadRingers Guild." Their debut EP "DeadRingers Guild" contained the track "War Path" which won the 2009 Independent Music Finalist Award in the Hard Rock/ Metal category. In April of 2010 they released their second EP "DeadRingers Guild II"" and followed with a multi-city promotional tour from Florida to Ohio. Throughout the years DeadRingers Guild was honored to have shared the stage with many national and international acts such as Paul Di'anno (Ex-Iron Maiden), Enforcer (Sweden), Cauldron (Canada) and Dark Castle.

In August 2010 Jake began recording his first solo instrumental EP "In the Shadows of Madness" which was produced by JJ Crews and features Adam Sagan (Echoterra, Ex-Into Eternity) on drums as well as Noah Martin (Arsis) on bass guitar. The 3 song EP was released in April of 2011 and is available on Itunes and Amazon.com. In November 2011, the 2nd track from the EP, "Harmony of the Spheres" was released on the Xbox 360 game ROCKBAND. Since March of 2011 Jake has been spotlighted in a series of instructional videos for Reign-licks.com and Ultimate-Guitar.com providing step by step instructions on how to play a featured "lick" of his original music. For more information on these videos go to the audio/video page. Beginning in September 2011, Jake has been a guest columnist with GuitarWorld.com creating articles on such topics as the "Do's and Dont's " of playing live and recording.

In July of 2011, Jake was chosen to replace Christian Lasaegue in the Power Metal band Jag Panzer (Century Media Records) unfortunately Jag Panzer disbanded shortly thereafter. During the Summer of 2011, Dreyer had the privilege of sharing the stage with Neil Turbin (formerly of Anthrax) and his band DeathRiders. In September of 2011 he joined the band WHITE WIZZARD and in October began a one month North American tour with FIREWIND, ARSIS, NIGHTRAGE followed by a two month European Tour as direct support for ICED EARTH. On May 12, 2012, Jake and the band (WW) performed for the first time in Japan to a sold out crowd at Club Quatro in Shibuya, Japan. Upon returning to the states, Jake recorded his solos for the band's newly released single "Torpedo of Truth". The following year the band released "The Devil's Cut with Jake writing and performing lead solos on every track of the album.

In October 2013, Jake departed White Wizzard to begin work on his next solo project. I started playing guitar in 2000 at age 11, and have always loved learning songs from my favorite artists. Metallica and Joe Satriani were the driving forces that inspired to me to pick up the instrument, and I soon immersed myself in the world of metal and shred guitar.

Fast forward to 2016, when I was named the grand prize winner of John Petrucci's Match the Master contest, a literal dream come true. This proved to be the catalyst for leaving my retail job and focusing solely on music. When I decided to transcribe some of my favorite songs and solos, I quickly realized how inaccurate the existing tabs were, and that many of my favorite bands had no official transcriptions at all.


EARLY LIFE AND CAREER
Born Joseph Michael Furney in Utica, New York—also home to television star Dick Clark, Boston's Tommy DeCarlo and Fran Cosmo, and famed guitar player Joe Bonamassa—Michael's primary interest growing up was baseball. From sun up to sun down, he played "America's Game." At an early age, Michael was also exposed to live music—mostly country artists like Loretta Lynn, Dolly Parton, and Kenny Rogers—through his father. At home, he would jam Elvis Presley, the Rolling Stones, and Neil Diamond on an 8-track player that he coveted. After the wearing out rock 'n' roll's superstars, Michael graduated to heavy metal via his cousin, with whom he discovered King Diamond, Judas Priest, and Iron Maiden. King Diamond was of specific interest to Michael, as the Danish native was an exceptional vocalist and a highly visual performer. But Michael's switch from baseball to rock 'n' roll/heavy metal didn't come at the behest of his cousin. Rather, Michael saw and became enamored with guitarist Saul Hudson (better known as Slash) after seeing the Guns N' Roses video for "November Rain" on MTV. At that point, there was no turning back for Michael.


"There were guitars around the house, but I didn't really have my own instrument," Michael says. "My dad bought me a Cruz Strat copy from Japan. I think it was $100. In a few days, I was reading tablature. Within a week or two, I was playing the usual songs that beginners play. I remember my first band was formed after a baseball game—my father was a baseball coach. A couple of the guys there played. I ended up meeting up with those guys and formed a band called, Asylum. We played Black Sabbath songs. We were terrible. I got better at playing guitar relatively quickly. So, I kept forming bands. People would come and go. So, I started to work on music by myself. I started to put on independent shows. I was sort of a promoter. I worked with the mayor and created the Music Utica Music Festival. I still couldn't make things happen in Utica—beyond guys doing cover bands—so I started to travel to New York City."
Michael spent a year between Utica and New York City trying to make bands work. Midnight Reign, the band he formed while living in Upstate New York traveled with him to Los Angeles, a trip Michael made on Greyhound bus with only $19 in his pocket. Guitar came naturally to him. Singing, however, did not. It was only out of desperation did Michael start singing when he was forced to track vocals for early Midnight Reign material. He wasn't the best singer—and he knew it—but Michael quickly found out that he enjoyed spending time singing and writing; more so than playing guitar. But unlike guitar, Michael really had to spend the time to hone in on his own vocal style and quality.


"Singing was the furthest thing from my mind," says Michael. "If you ever find old live videos of me singing—in Midnight Reign—it's pretty obvious that I had no idea I was going to be a singer. I had to intensely focus on singing. I was a guitarist/songwriter first and foremost. But every band or project that I was a part of was a level up opportunity for me. With voice, there were no shortcuts. It's simply hard work.