Art and the Working Class (Paperback) 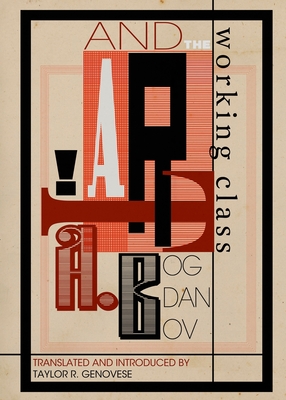 Art and the Working Class (Paperback)

"After a long century-thanks to the careful translation by Taylor Genovese-we finally have Alexander Bogdanov's classic work available in English. A provocative and combative tract written during the Russian Revolution, Art and the Working Class anticipates later debates on the centrality of culture in revolutionary struggles. This is all about cultural revolution And we have Genovese to thank for this brilliant translation and his expert Introduction."

"This work, gorgeously translated into English for the first time, provides a crucial resource for those on the anti-capitalist left hoping for a theory of art informed by and for the toiling masses. Using critical methodologies, Bogdanov illustrates the importance of fostering and analyzing proletarian art. Introduced with a sharp and eminently useful piece by the translator, Taylor Genovese, Art and the Working Class develops a working class analytical framework of the arts, and provides inspiration for those who set out not only to dream of a more just and beautiful world, but also for those who fight for it."

Appearing for the first time in English, Art and the Working Class is the work of Alexander Bogdanov, a revolutionary polymath and co-founder, with Vladimir Lenin, of the Bolshevik faction of the Russian Social Democratic Labor Party. Bogdanov was a strong proponent of the arts, co-founding the Proletarian Culture (Proletkult) organization to provide political and artistic education to workers.