Digging into Stirling's Past: Uncovering the Secrets of Scotland's Smallest City (Paperback) 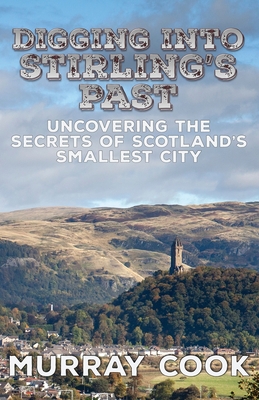 Digging into Stirling's Past: Uncovering the Secrets of Scotland's Smallest City (Paperback)

Stirling is Scotland's smallest city and one of its newest. But, strangely, it's also the ancient capital and one of the most important locations in all of Scottish history. If you wanted to invade or to resist invasion, you did it at Stirling. It has witnessed Celts, Romans, Britons, Picts, Scots, Angles, Vikings, Edward I, William Wallace, Robert the Bruce, Edward II, Oliver Cromwell, Bonnie Prince Charlie, the Duke of Cumberland, and even played a decisive role in D-Day.

This book tells Stirling's story through its secret nooks and crannies; the spots the tourists overlook and those that the locals have forgotten or never visited. Join Stirling's Burgh Archaeologist, Dr Murray Cook, as he takes you on a tour of a fascinating city's history which is full of heroes and battles, grave robbing, witch trials, bloody beheadings, violent sieges, Jacobite plots, assassins, villains, plagues, Kings and Queens... and much, much more besides.