The Question Concerning Technology in China: An Essay in Cosmotechnics (Urbanomic / Mono #3) (Paperback) 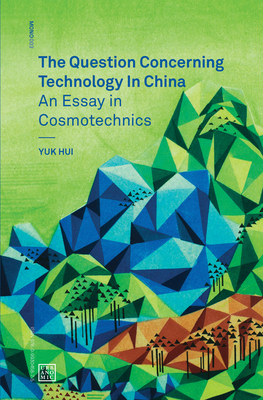 The Question Concerning Technology in China: An Essay in Cosmotechnics (Urbanomic / Mono #3) (Paperback)


Title unavailable, please email for information.
A systematic historical survey of Chinese thought is followed by an investigation of the historical-metaphysical questions of modern technology, asking how Chinese thought might contribute to a renewed questioning of globalized technics.

Heidegger's critique of modern technology and its relation to metaphysics has been widely accepted in the East. Yet the conception that there is only one—originally Greek—type of technics has been an obstacle to any original critical thinking of technology in modern Chinese thought.

Yuk Hui argues for the urgency of imagining a specifically Chinese philosophy of technology capable of responding to Heidegger's challenge, while problematizing the affirmation of technics and technologies as anthropologically universal.

This investigation of the historical-metaphysical question of technology, drawing on Lyotard, Simondon, and Stiegler, and introducing a history of modern Eastern philosophical thinking largely unknown to Western readers, including philosophers such as Feng Youlan, Mou Zongsan, and Keiji Nishitani, sheds new light on the obscurity of the question of technology in China. Why was technics never thematized in Chinese thought? Why has time never been a real question for Chinese philosophy? How was the traditional concept of Qi transformed in its relation to Dao as China welcomed technological modernity and westernization?

In The Question Concerning Technology in China, a systematic historical survey of the major concepts of traditional Chinese thinking is followed by a startlingly original investigation of these questions, in order to ask how Chinese thought might today contribute to a renewed, cosmotechnical questioning of globalized technics.

Yuk Hui is a philosopher based in Berlin and the author of On the Existence of Digital Objects and Recursivity and Contingency.