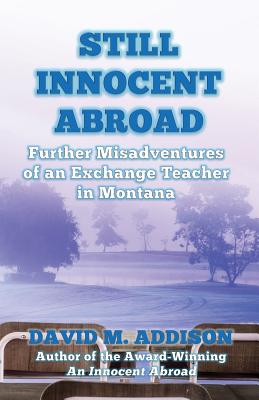 In this sequel to his award-winning An Innocent Abroad, Scot David M. Addison continues his account of a year spent as an exchange teacher in Missoula, Montana in the western United States.

When he embarked on the exchange, the author vowed he would embrace every experience (within reason) that came his way and mostly they were reasonable, though there were some he would not care to repeat.

In the course of this book, he experiences seasonal activities such as Hallowe'en (American style), Kris Kringle and Thanksgiving. He also sits his driving test in his wreck of a wagon which he not-so-fondly dubs "The Big Blue Mean Machine" and whose malfunctions continue to plague him in this book, just as they did in the last.

Nevertheless the author and his young family put their trust in it to take them, in winter, on the 1,200 mile round trip over the snow-clad Rockies to visit relations in Canada - just for a long weekend. Which just goes to show you that although he may have learned some things, this author from a small island is still very much an Innocent abroad in this vast and mountainous land to even contemplate embarking on such an expedition - particularly since he set out so ill equipped.

Meanwhile, at school, he is on his best behaviour as he tries not to repeat the shocks and alarms of the first few days when he found himself up to his neck in trouble with parents out to get his guts for garters. The reader will not be disappointed to discover that he still finds some parents and students challenging. At the same time, he is also on his guard for attacks from the "enemy" within - his practical-joker colleagues who are all too keen to exploit his innocence for their own amusement.

The narrative ends with the traumatic events at Christmas. It would have been a memorable day whatever happened, but no-one bargained for the Addisons turning their hosts' Christmas Day into one they would not forget in a hurry.