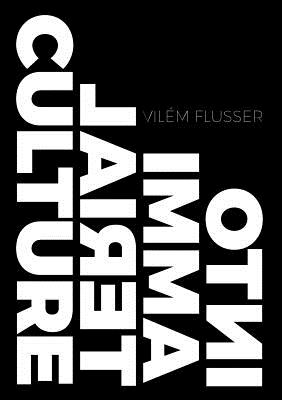 This is book number 1 in the Metaflux // Vilem Flusser series.

Is the alphabet about to disappear? How will we communicate without it? Are there any indications of new, emergent codes? Is human communication going through a mutation? These are only some of the provocative questions posed by Vil m Flusser in Into Immaterial Culture.

The four essays of this book were delivered as a series of lectures at the School of Communication and the Arts of the University of S o Paulo in August of 1986, one year after the publication of the first Brazilian edition of Towards a Philosophy of Photography, published as A Filosofia da Caixa Preta.

Through these four short essays, Flusser presents, in a nutshell, his communications theory. Their style is condensed, with a series of quick-fire sentences, which are best read in conjunction with his major works of the same period. However, for a fist time reader of his work, these four lectures are a good introduction to some of Flusser's polemic and provocative concepts regarding human communication, its future, and its ethical, aesthetic, and epistemological implications; a vision that is paradoxically utopian and dystopian.