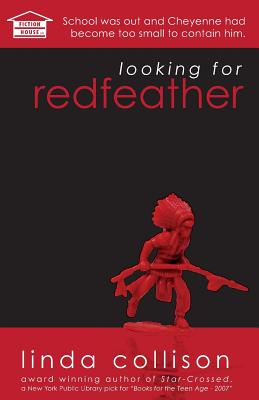 Life is a highway...Fifteen-year-old Ramie Redfeather leaves Cheyenne with music in his pocket and his thumb in the air. He's looking to find his father, a man he's never met. Ramie gets a ride with Chas Sweeney, a seventeen-year-old driving a "borrowed" Cadillac Eldorado with Maryland tags, who just happens to be passing through Cheyenne. Chas is running away from the wreckage that is his world, sixteen hundred miles away. In Denver Ramie and Chas meet Mae B. LaRoux, an enchanting young singer from Baton Rouge. LaRoux, who struggles with a learning disability, is on a mission to become a professional musician. the three runaways band together and set out on a fast-paced road trip to get to the Austin Music Festival, looking for Refeather on the way. They're on the road -- but it ain't Jack Kerouac's road trip A finalist in Foreword's Book of the Year 2013 Award, Young Adult category.

Linda Collison's first novel, Star-Crossed, published by Alfred A. Knopf in 2006, was chosen by the New York Public Library to be among the Books for the Teen Age-2007, and inspired the Patricia MacPherson Nautical Adventure Series. Her coming-of-age story, With a Little Luck, won the former Maui Writers Grand Prize in 1996. Born in Baltimore, Linda moved to Wyoming when she was twenty-four and has been on the move -- and writing -- ever since.