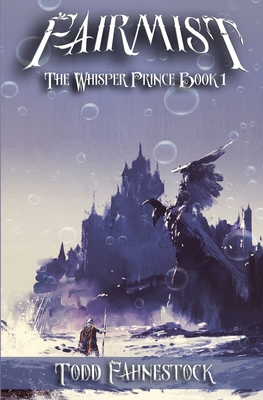 By Todd Fahnestock
List Price: $17.99
Our Price: $14.99
(Save: $3.00 17%)
On Our Shelves Now
A lost princess. A blood debt. A cloak of lies. Within the Thiaran Empire, citizens put on jeweled masks and turn away from those who are taken. As long as one child is sacrificed each month to the Slinks and nobody interferes, their society will thrive. But seventeen-year-old Grei's mind is alive with treason, and he plunges into the heart of a prophecy that will drive the Slinks back to their fiery dimension. All he must do is travel to the capital city and sacrifice one last innocent. As Grei wrestles with the prophecy and battles those who would kill him, he hurtles toward his final decision: save the empire, or save his own soul. Fairmist is the first book in The Whisper Prince epic fantasy series. If you like epic fantasy, detailed world-building, strong female protagonists, and a plot with a twist, you'll love Todd Fahnestock's latest series. Buy Fairmist today to join the adventure.
TODD FAHNESTOCK wrote his first novel in high school because he "wanted a fantasy book with even more action in it." Later in college, he published his first two short stories in TSR Dragonlance anthologies. In 1997, he published more short stories with co-author Giles Carwyn, winning the New York Books for the Teen Age award for True Love (Or the Many Brides of Prince Charming). In 2006, Todd wrote Heir of Autumn with Giles under HarperCollins' Eos imprint and hit the Denver Post bestseller list. Mistress of Winter and Queen of Oblivion followed, then Todd went solo again. He currently lives in a 115-year-old Victorian house in Englewood, CO with his wife, daughter, son, one big blue dog and one big red dog. He splits his time between Tae Kwon Do, playing with children, working his day job in the world of philanthropy, and writing that next novel. Visit Todd at: WWW.TODDFAHNESTOCK.COM @TODD_FAHNESTOCK on Twitter
"In a crowded genre, Fairmist carves out its own place amongst the best in our time. With its thrilling plot structure and complex character development, Fairmist breathes fresh life in the epic fantasy realm. The reader will find themselves captivated by the heroes', as well as the villains', plights throughout the novel. I couldn't tear away from this excellent story."
-Steve McDonald

"Finally. A novel with female characters that kick-ass while demonstrating grace, intelligence and the power of their sexuality. As they guide a fallible yet truly heroic Grei through the adventures of Fairmist, I couldn't help but be captivated. Todd Fahnestock is one of the best of our time. I cannot wait for the next!"
-Bridget Lovett

"Fairmist is raw, sensual, and fast-paced. In Fahnestock’s mystical world of floating mountains, sideways houses, and suspended raindrops, conflicting loyalties force hard decisions, and characters must question things they have always believed. Fahnestock shines the light on the fact that good vs. evil is not always crystal clear, and that sometimes, we are our own worst enemies."
-Elizabeth Moser