Flying Home: The Colorado Plateau From Above and Below (Paperback) 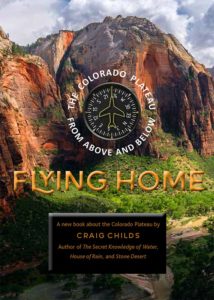 By Craig Childs
$24.95
Special Request - May Not Be Available

In Flying Home, The Colorado Plateau from Above and Below, Craig Childs is your guide as he and his pilot friend Neal Schwieterman hop from one mesa-top landing strip to another in a 1946 Cessna.

Between hawk’s-eye panoramas and on-the-ground adventures, you’ll fly directly into the heart of the Colorado Plateau in a uniquely memorable way.

Craig Childs is a commentator for NPR s Morning Edition, and his work has appeared in The New York Times, Los Angeles Times, Men s Journal, Outside, The Sun, and Orion. He has won numerous awards including the 2011 Ellen Meloy Desert Writers Award, 2008 Rowell Award for the Art of Adventure, the 2007 Sigurd Olson Nature Writing Award, and the 2003 Spirit of the West Award for his body of work.