The Simulation Hypothesis: An MIT Computer Scientist Shows Why AI, Quantum Physics and Eastern Mystics All Agree We Are In a Video Game (Paperback) 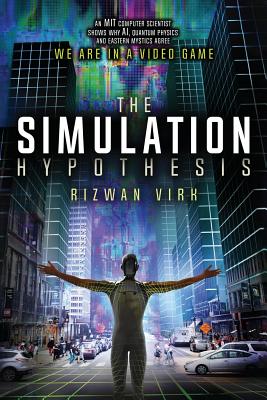 The Simulation Hypothesis: An MIT Computer Scientist Shows Why AI, Quantum Physics and Eastern Mystics All Agree We Are In a Video Game (Paperback)

The Simulation Hypothesis, by best-selling author, renowned MIT computer scientist and Silicon Valley video game designer Rizwan Virk, is the first serious book to explain one of the most daring and consequential theories of our time. Riz is the Executive Director of Play Labs @ MIT, a video game startup incubator at the MIT Game Lab.

Drawing from research and concepts from computer science, artificial intelligence, video games, quantum physics, and referencing both speculative fiction and ancient eastern spiritual texts, Virk shows how all of these traditions come together to point to the idea that we may be inside a simulated reality like the Matrix.

The Simulation Hypothesis is the idea that our physical reality, far from being a solid physical universe, is part of an increasingly sophisticated video game-like simulation, where we all have multiple lives, consisting of pixels with its own internal clock run by some giant Artificial Intelligence. Simulation theory explains some of the biggest mysteries of quantum and relativistic physics, such as quantum indeterminacy, parallel universes, and the integral nature of the speed of light.

Recently, the idea that we may be living in a giant video game has received a lot of attention:

"The chances that we not in a simualtion is one in billions." -Elon Musk

"I find it hard to argue we are not in a simulation." -Neil deGrasse Tyson

"We are living in computer generated reality." -Philip K. Dick

Video game technology has developed from basic arcade and text adventures to MMORPGs. Video game designer Riz Virk shows how these games may continue to evolve in the future, including virtual reality, augmented reality, Artificial Intelligence, and quantum computing. This book shows how this evolution could lead us to the point of being able to develop all encompassing virtual worlds like the Oasis in Ready Player One, or the simulated reality in the Matrix.

While the idea sounds like science fiction, many scientists, engineers, and professors have given the Simulation Hypothesis serious consideration. Futurist Ray Kurzweil has popularized the idea of downloading our consciousness into a silicon based device, which would mean we are just digital information after all. Some, like Oxford lecturer Nick Bostrom, goes further and thinks we may in fact be artificially intelligent consciousness inside such a simulation already

But the Simulation Hypothesis is not just a modern idea. Philosophers like Plato have been telling us that we live in a "cave" and can only see shadows of the real world. Mystics of all traditions have long contended that we are living in some kind of "illusion "and that there are other realities which we can access with our minds. While even Judeo-Christian traditions have this idea, Eastern traditions like Buddhism and Hinduism make this idea part of their core tradition -- that we are inside a dream world ("Maya" or illusion, or Vishnu's Dream), and we have "multiple lives" playing different characters when one dies, continuing to gain experience and "level up" after completing certain challenges. Sounds a lot like a video game

Whether you are a computer scientist, a fan of science fiction like the Matrix movies, a video game enthusiast, or a spiritual seeker, The Simulation Hypothesis touches on all these areas, and you will never look at the world the same way again