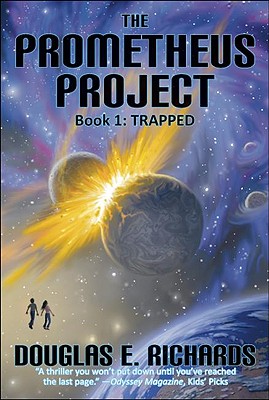 By Douglas E. Richards
$9.95
Available to Order - Usually Arrives in Our Store in 4 to 7 Days

From the New York Times and USA Today bestselling author of the adult thriller, WIRED, its sequel, AMPED, and the adult science fiction/technothriller, THE CURE The Prometheus Project: Trapped is the first book in a science fiction series that has been widely praised by kids, adults, reluctant readers, and advanced readers alike. Ages 9 to adult A fantastic alien city buried deep underground. What wonders -- and what dangers -- is it hiding? Ryan and Regan Resnick have just moved to the world's most boring place. But when they discover their parents are part of an ultra-secret project called Prometheus they are plunged into a nonstop adventure: one that will be the ultimate test of their wit, courage, and determination. Soon they are under attack and facing hostile alien worlds, alien technology, and unimaginable dangers at every turn. Now, with their mother facing certain death, they must race to solve a seemingly impossible mystery to have any hope of saving her. But if they save their mom, they will have no way to save themselves. . .

"Recommended. Cinematic. Readers will surely be reminded of Eleanor Cameron's Mushroom Planet series, as well as Heinlein's Have Space Suit --Will Travel, and even Clarke's 2001." --Asimov's Science Fiction magazine "My class loved it. They were totally engaged. It's a hard book to put down." --5th Grade Teacher, Quoted in the San Diego Union-Tribune "This science-fiction mystery series certainly keeps you turning the pages. It had me hooked by page two of the first book." --The Children's Book Review "Fun and suspenseful. Highly recommended." -- kirkus "Captures that pulse-pounding excitement you remember from your Have Spaceship Will Travel and Postmarked the Stars days. . . . crisp, clean, and delivers what it promises." --SFReader.com About the Author Douglas E. Richards is the New York Times and USA Today bestselling author of the science-fiction/technothriller, WIRED, its sequel, AMPED, THE CURE, and six critically acclaimed adventures for children. Richards was a biotechnology executive for many years before leaving to write full time. He earned a BS in microbiology from the Ohio State University, a master's degree in molecular biology (aka "genetic engineering") from the University of Wisconsin--Madison, and an MBA from the University of Chicago. In 2010, in recognition of his work, Richards was selected to be a "special guest" at San Diego Comic-Con International, along with such icons as Stan Lee, Ray Bradbury, and Rick Riordan. He has written numerous feature articles for the award-winning magazine, National Geographic KIDS -- some having appeared in a dozen languages in as many as sixteen countries -- as well as essays for the BBC, The Australian Broadcasting Corporation, Earth & Sky, Today's Parent, and many others. Richards currently lives in San Diego, California with his wife, Kelly, his children, Ryan and Regan (for whom the main characters in his PROMETHEUS PROJECT series are named), and his dogs Dash and Myla. You can friend Richards on Facebook at Douglas E. Richards Author, and write to him at doug@san.rr.com