I Will Bite You! (Paperback) 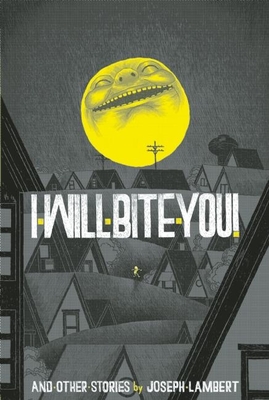 I Will Bite You! (Paperback)

I Will Bite You is Eisner Award winner Joe Lambert's debut short story collection for weird kids of all ages.

Joseph Lambert is a graduate of the Center for Cartoon Studies. His comic "Turtle Keep it Steady!" was published in Houghton Mifflin's The Best American Comics 2008, for which he also designed the endpapers. His illustrations have appeared in Business Week, Popular Mechanics, 7Days, the Comics Journal and many other publications. I Will Bite You! and Other Stories, a Secret Acres collection, was nominated for the LA Times Book Prize for Best Graphic Novel, and won the 2011 Ignatz Award for Outstanding Collection and Outstanding Artist. Lambert's Annie Sullivan and the Trials of Helen Keller (Hyperion), was the winner of the 2013 Eisner Award for Best Reality-Based Work.