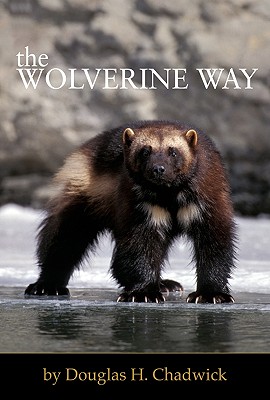 Glutton, demon of destruction, symbol of slaughter, mightiest of wilderness villains… The wolverine comes marked with a reputation based on myth and fancy. Yet this enigmatic animal is more complex than the legends that surround it. With a shrinking wilderness and global warming, the future of the wolverine is uncertain. The Wolverine Way reveals the natural history of this species and the forces that threaten its future, engagingly told by Douglas Chadwick, who volunteered with the Glacier Wolverine Project. This five-year study in Glacier National Park – which involved dealing with blizzards, grizzlies, sheer mountain walls, and other daily challenges to survival – uncovered key missing information about the wolverine’s habitat, social structure and reproduction habits. Wolverines, according to Chadwick, are the land equivalent of polar bears in regard to the impacts of global warming. The plight of wolverines adds to the call for wildlife corridors that connect existing habitat that is proposed by the Freedom to Roam coalition.

A wildlife biologist who studied mountain goats and grizzlies in the Rockies, Doug Chadwick began writing about natural history and conservation for national magazines. On assignments from Siberia to the Congo River's headwaters, he has produced several hundred popular articles and ten books. He is also the vice chair of the board of Vital Ground, a nonprofit land trust that has helped safeguard more than 600,000 acres of wildlife habitat in Alaska, Canada, and the western US.

“I have been fascinated by wolverines ever since I read about them as a child. The Wolverine Way is an astonishing account of these fearless, indefatigable
and highly intelligent animals and the equally fearless and indefatigable scientists and volunteers who study them. Chadwick’s writing transports us high into the frozen mountains and lakes of Glacier National Park with its dazzling beauty and treacherous storms and avalanches. This is a book full of adventure, courage and determination.  Bravo to Patagonia for its support of the wolverines and the wildlife corridor which may prevent their extinction.” --Jane Goodall, PhD, DBE Founder - the Jane Goodall Institute & UN Messenger of Peace

“Is there an animal that embodies the spirit of wildness more than the wolverine? Chadwick's account of these remarkable creatures and the people who study them expresses the environmental crossroads that the wolverine -- and all of us -- stand at. It should make every person stop and think about how much we would be losing should the wolverine not survive the many challenges it faces.” -- H. Emerson Blake, Editor-in-Chief, Orion Magazine