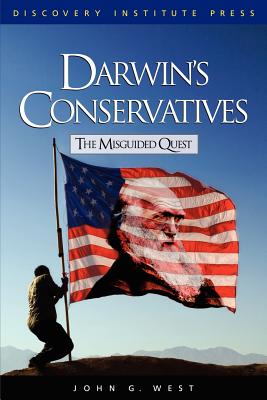 While conservatives are presumed to be critical of Darwin’s theory, many on the right, such as George Will, James Q. Wilson, and Larry Arnhart, have mounted a vigorous defense of Darwinism. As Discovery Institute's John West explains in his book, Darwin's Conservatives: The Misguided Quest, their attempts to reconcile conservatism and Darwinian biology misunderstand both.

In this small but incisive book, Dr. West addresses how Darwin’s theory, contrary to its conservative champions, manifestly does not reinforce the teachings of conservatism. According to West, Darwinism promotes moral relativism rather than traditional morality. It fosters utopianism rather than limited government. It is corrosive, rather than supportive, of both free will and religious belief. Finally, and most importantly, Darwinian evolution is in tension with the scientific evidence, and conservatism cannot hope to strengthen itself by relying on Darwinism’s increasingly shaky empirical foundations.  This book issues a challenge to conservatives they cannot afford to ignore. According to Prof. J. Budziszewski of the University of Texas, Austin, hails the book for “showing clearly that Darwinism is not a source of conservative insight into human nature, but only a source of confusion.”

Dr. John West is a Senior Fellow at the Seattle-based Discovery Institute, where he is Associate Director of Discovery's Center for Science & Culture and Vice President for Public Policy and Legal Affairs. Dr. West holds a Ph.D in Government from Claremont Graduate University and a B.A. in Communications from the University of Washington.

“John West rolls through the arguments for a pro-Darwin conservatism like an Abrams tank leveling a street barricade: methodically and irresistibly. If there are any conservative Darwinists left after this rout, it’s only because they won’t stand and fight.”—George Gilder, author of Wealth & Poverty and Telecosm.

“No one can consider themselves fully acquainted with the issue of intelligent design without confronting the serious critique in this book.”—Steven Hayward, author of The Age of Reagan

“Conservative pundits all too often have a blind spot for that outdated Victorian creation myth known as Darwinism... finally, here is a book that holds their feet to the fire and sets the record straight.”—Dr. William Dembski, author of The Design Revolution and The Design Inference