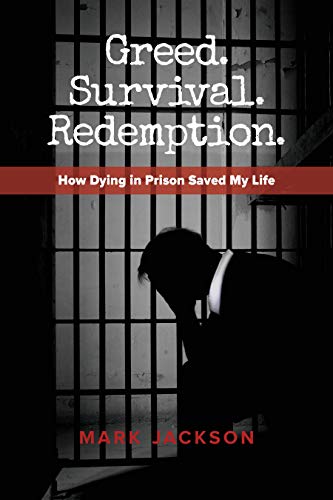 Written surreptitiously behind prison walls this is the captivating journey of author Mark Jackson – from greedy stock market trader making millions of dollars operating a Ponzi scheme to surviving Colorado’s most notorious and violent prisons. Mark memorialized his prison experiences by writing in a journal. This book is the product of over 650 pages of those handwritten entries detailing his fears, emotions, and interactions and eventual self-transformation behind bars.

In 2010, Mark pled guilty to racketeering under The Colorado Organized Crime Act. He was sentenced to a 15-year prison term in the Colorado Department of Corrections and was incarcerated for nearly five years. The Ponzi scheme was deemed by "The Denver Business Journal" as one of the most notorious white collar crimes in Denver’s financial history.
Six weeks into his incarceration Mark contracted necrotizing fasciitis, a deadly flesh eating disease. While laying on his death bed after being resuscitated on a Flight for Life helicopter, Mark made a decision that would change his life forever. He pledged to turn his life around and to begin accepting responsibility for hurting many innocent victims.
“I realized the pledge I made on my death bed would mean nothing if I couldn’t survive the rigors of prison. Before I could rehabilitate myself and improve the lives of my fellow inmates, I had to learn how to be a good inmate. I knew how to conduct myself in free society (my prison sentence said otherwise), but I realized I had little idea how to act in a prison society.”
Mark survived two of the most violent prisons in Colorado. While sharing prison cells with murderers, kidnappers, and ruthless gang members, his interactions were often tense and filled with raw unfiltered language. Multiple inmates were murdered at the same facility where he was being held. However, Mark rose above the turmoil of his surroundings, recovered from a life threatening illness, and devoted his remaining sentence to helping other people.

Mark’s journey details his growth while adapting as a prisoner, but more importantly his mission to become a better person beginning with helping other inmates. As a prison tutor, he assisted over 100 inmates obtain their GED. He also helped countless inmates effectively deal with personal, legal, and family issues.

This is a unique and inspirational story about prison tragedies and triumphs mixed in with some wry humor. This book was not written for selfish purposes, but rather to inspire others and help them realize they too can overcome their own personal challenges and adversity. This is a true story about greed, survival, and redemption.