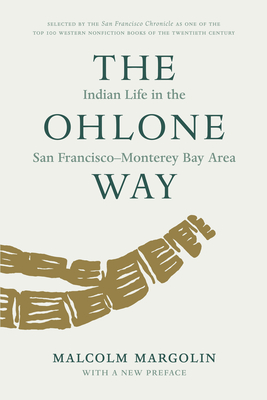 Selected by the San Francisco Chronicle's as one of the top 100 western nonfiction books of the twentieth century.

One of the most ground-breaking and highly-acclaimed titles that Heyday has published, The Ohlone Way describes the culture of the Indian people who inhabited Bay Area prior to the arrival of Europeans. With clear and accessible writing that is spirited and at the same time informed, Malcolm Margolin vividly recreates the Ohlones' lost world. From his unique vantage point as a "friend of the family," he updates this classic text with a new preface that tells stories of the Ohlones' continued endurance and resurgence.

Malcolm Margolin is the publisher emeritus of Heyday, an independent nonprofit publisher and unique cultural institution, which he founded in 1974. Margolin is author of several books, including The Ohlone Way: Indian Life in the San Francisco-Monterey Bay Area, named by the San Francisco Chronicle as one of the hundred most important books of the twentieth century by a western writer. He has received dozens of prestigious awards among which are the Chairman's Commendation from the National Endowment for the Humanities, the Fred Cody Award Lifetime Achievement from the San Francisco Bay Area Book Reviewers Association, the Helen Crocker Russell Award for Community Leadership from the San Francisco Foundation, the Carey McWilliams Award for Lifetime Achievement from the California Studies Association, an Oscar Lewis Award for Western History from the Book Club of California, a Hubert Bancroft Award from Friends of the Bancroft Library, a Cultural Freedom Award from the Lannan Foundation, and a Distinguished Service Award from the Society of Professional Journalists. He helped found the Bay Nature Institute and the Alliance for California Traditional Artists.