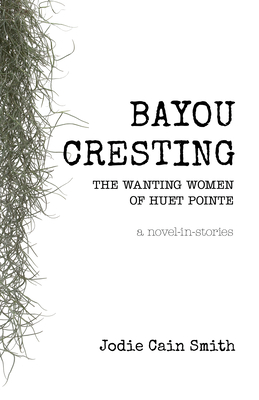 In Huet Pointe, ambition is as dangerous as the brackish water that surrounds the sliver of land. But the women of this antebellum hamlet yearn for more than society insists they be-devout, feminine, and content with living according to cultural norms. So, what's a girl to do? She could employ poison, perhaps a bit of adultery, and drowning in alligator-infested waters is always a choice-whatever it takes to achieve her goal. A novel-in-stories, Bayou Cresting: The Wanting Women of Huet Pointe, tells the stories of ten women brought together by proximity, forever entangled by the actions they take.

Jodie Cain Smith is a graduate of the University of South Alabama and Northern Michigan University because earning a degree on both the southern and northern border happened by pure chance and a bit of study. She is the author of The Woods at Barlow Bend, her debut novel based on the true story of her grandmother's tumultuous adolescence in rural Alabama. Her short works have appeared in The Petigru Review, Pieces Anthology, and Chicken Soup for the Military Spouse's Soul. When not creating fictional worlds on her laptop, Jodie hangs out with her long-suffering husband and the most precious boy ever created. Seriously, the kid is amazing, and the husband puts up with a lot.