The Death of Raymond Yellow Thunder: And Other True Stories from the Nebraska-Pine Ridge Border Towns (Plains Histories) (Paperback) 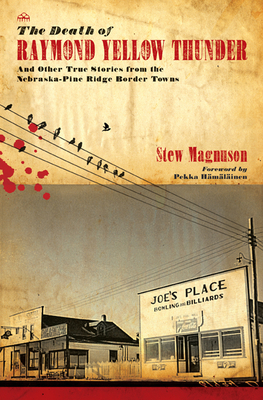 The Death of Raymond Yellow Thunder: And Other True Stories from the Nebraska-Pine Ridge Border Towns (Plains Histories) (Paperback)


Available to Order - Usually Arrives in Our Store in 4 to 7 Days
The long-intertwined communities of the Oglala Lakota Pine Ridge Reservation and the bordering towns in Sheridan County, Nebraska, mark their histories in sensational incidents and quiet human connections, many recorded in detail here for the first time. After covering racial unrest in the remote northwest corner of his home state of Nebraska in 1999, journalist Stew Magnuson returned four years later to consider the border towns' peoples, their paths, and the forces that separate them. Examining Raymond Yellow Thunder's death at the hands of four white men in 1972, Magnuson looks deep into the past that gave rise to the tragedy. Situating long-ranging repercussions within 130 years of context, he also recounts the largely forgotten struggles of American Indian Movement activist Bob Yellow Bird and tells the story of Whiteclay, Nebraska, the controversial border hamlet that continues to sell millions of cans of beer per year to the "dry" reservation. Within this microcosm of cultural conflict, Magnuson explores the odds against community's power to transcend misunderstanding, alcoholism, prejudice, and violence.
A native of Omaha and a graduate of the University of Nebraska Lincoln, Stew Magnuson is a Washington, D.C. based journalist and former foreign correspondent who has filed stories from Mali, Japan, Cambodia, Burma, Laos, Thailand, and Indonesia. He has traveled or lived in forty-five countries, including the Islamic Republic of Mauritania, where he served in the Peace Corps, and Peshawar, Pakistan, where he worked with Afghan refugees in the late 1980s. He lives in Arlington, Virginia.Pekka Hamalainen is associate professor of history at the University of California, Santa Barbara, and specializes in borderlands and Native American history. He is the author of The Comanche Empire."