As a Farm Woman Thinks: Life and Land on the Texas High Plains, 1890–1960 (Plains Histories) (Hardcover) 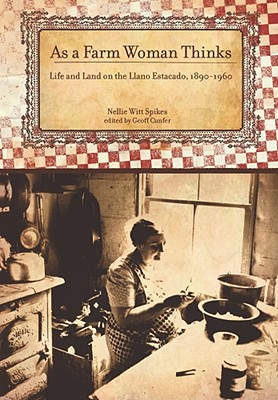 As a Farm Woman Thinks: Life and Land on the Texas High Plains, 1890–1960 (Plains Histories) (Hardcover)


Available to Order - Usually Arrives in Our Store in 4 to 7 Days
In twenty-five years of syndicated columns in small-town Texas newspapers between 1930 and 1960, Nellie Witt Spikes described her life on the High Plains, harking back to earlier times and reminiscing about pioneer settlement, farm and small-town culture, women’s work, and the natural history of the flatlands and canyons. Spikes’s life spanned the arrival of Euro-American settlers, the transition from ranching to farming, the drought and dust storms of the 1930s, and the irrigation revolution of the 1940s. Engaging and eloquent, her “As a Farm Woman Thinks” columns today conjure up a vivid portrait of a bygone era. Spikes’s best pieces, organized topically and then chronologically here by Geoff Cunfer, are illuminated by black-and-white historical photographs featuring people, landscapes, small towns, farms, and ranches that populated the caprock-and-canyon country of her West Texas. Cunfer’s introduction and editorial commentary provide context. For historians, As a Farm Woman Thinks enlarges our understanding of a wide land and its culture. For the rest of us, Spikes’s “poetry of place” still captures the spirit of the Plains and, decades later, inspires imagination and memory.
Nellie Witt Spikes (1888–1977) wrote for the Ralls Banner, the Lorenzo Tribune, the Floyd County Hesperian, and the Crosbyton Review, among other publications. With her sister-in-law, Temple Ann Ellis, in 1952 she wrote and published Through the Years: A History of Crosby County, Texas.Geoff Cunfer, a graduate of the University of North Carolina, Texas Tech University, and the University of Texas, teaches American, Great Plains, and environmental history at the University of Saskatchewan. He is the author of On the Great Plains: Agriculture and Environment, winner of the Social Science History Association’s 2003 President’s Book Award and the Agricultural History Society’s 2006 Theodore Saloutos Book Award.Sandra Scofield is the author of several books, including, most recently, Occasions of Sin: A Memoir and The Scene Book: A Primer for the Fiction Writer.