The Salish People: Volume II: The Squamish and the Lillooet (Paperback) 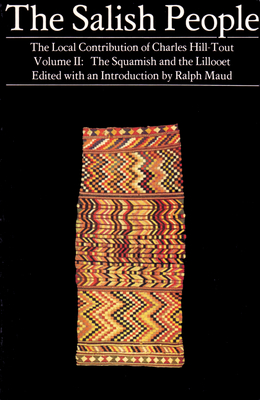 The Salish People: Volume II: The Squamish and the Lillooet (Paperback)

This is book number 2 in the Salish People series.

Charles Hill-Tout was born in England in 1858 and came to British Columbia in 1891. A pioneer settler at Abbotsford in the Fraser Valley, he devoted many years studying the Salish and publishing in the scholarly periodicals of the day. He was honoured as president of the Anthropological Section of the Royal Society of Canada and as a fellow of the Royal Anthropological Institute of Great Britain. In The Salish People, his field reports are collected for the first time. In The Salish People each volums serves as a useful guide to a specific geographic area, bringing the past to the present. The four volumes, rich in stories and factual details about the old customs of the Coast and Interior Salish, are each edited with an introduction by Ralph Maud, who lives in the Fraser Valley and who teaches a course on the B.C. Indian Oral Tradition at Simon Fraser University. Volume II of The Salish People deals with the people of the Squamish and the Lillooet, including the Origin Myth as told by a 100-year-old storyteller whose mother saw Captain Cook sail into Howe Sound in 1792. The "asides" Hill-Tout provides throughout the text are highly informative. In one, where fine snow is described, he says: "In this point of the recital the old man was exceedingly interesting and graphic in his description, the very tones of his voice lending themselves to his story, and I gathered, long before the interpreter took up the story, that he had told of something that was very small and had penetrated everywhere." And again, where the Squamish dead are described: "Here the old man's voice was hushed to a plaintive wail, and the faces of his audience were an eloquent index of the tragic interest of his story of their ancestors' misfortunes."
Charles Hill-ToutCharles Hill-Tout devoted many years to ethnographic and anthropological field work among the Salish people of the west coast recording their customs, stories and art. The Salish People is a four volume collection of all the field work done by Charles Hill-Tout in the period 1895 to 1911, divided by specific geographical and cultural areas. Ralph MaudRalph Maud is the author of Charles Olson Reading (1996) and the editor of The Selected Letters of Charles Olson (2000). He has edited much of Dylan Thomas's work, including The Notebook Poems, 1930-1934 and The Broadcasts, and is co-editor, with Walford Davies, of Dylan Thomas: The Collected Poems, 1934-1953 and Under Milk Wood. Maud is also the editor of The Salish People: Volumes I, II, III and IV by pioneer ethnographer Charles Hill-Tout. In addition, he has done extensive work on the translation collaboration between Henry W. Tate and Franz Boas, including the book, Transmission Difficulties: Franz Boas and Tsimshian Mythology.