Don't Mess with Me: The Strange Lives of Venomous Sea Creatures (How Nature Works) (Paperback) 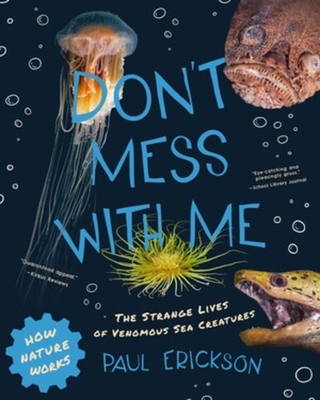 Don't Mess with Me: The Strange Lives of Venomous Sea Creatures (How Nature Works) (Paperback)

The role of venoms in nature … and in human medicine.

Why are toxins so advantageous to their possessors as to evolve over and over again? What is it about watery environments that favors so many venomous creatures? Marine biologist Paul Erickson explores these and other questions with astounding images from Andrew Martinez and other top underwater photographers.

Scorpions and brown recluse spiders are fine as far as they go, but if you want daily contact with venomous creatures, the ocean is the place to be. Blue-ringed octopi, stony corals, sea jellies, stonefish, lionfish, poison-fanged blennies, stingrays, cone snails, blind remipedes, fire urchins—you can choose your poison in the ocean. Venoms are often but not always defensive weapons. The banded sea krait, an aquatic snake, wriggles into undersea caves to prey on vicious moray eels, killing them with one of the world’s most deadly neurotoxins, which it injects through fangs that resemble hypodermic needles.

Writer, photographer, and video producer Paul Erickson creates exhibits, websites, guides, and videos for zoos, museums, and aquariums including the New England Aquarium, the Houston Zoo, Zoo Miami, the Friends of the Los Angeles River, the Museum of Science and Discovery, and many others. He has authored or co-authored numerous magazine articles and three books about undersea life. His book The Pier at the End of the World was named an Outstanding Science Trade Book of 2016 by the National Science Teachers Association.

ANDREW MARTINEZ (Danbury, MA) specializes in images of the undersea world and is the author and photographer of Marine Life of the North Atlantic. He travels the world to photograph sea life, and was the photographer for The Pier at the End of the World named an Outstanding Science Trade Book of 2016 by the National Science Teachers Association.

I like that the author explains the difference between poisonous and venomous sea creatures. I also like that they point out that some are invasive species so you don't want them in your aquarium or released into the sea. I recommend this non-fiction book for classroom libraries, school libraries, and public libraries everywhere.
— Chat with Vera

Striking photographs and informative text introduce venomous ocean-dwellers…fast facts about the 28 different species described in this tempting title…Most spreads include a boxed text headed "How Nature Works," which may describe open scientific questions, settled theories, or applications. Erickson doesn't pander to his readers: He uses appropriate terminology. Martinez's clearly captioned photographs show the creatures in their habitats; there are also diagrams and microscope images. Colorful pages and varied design add interest. Though the text in this entry in an admirable series may be challenging for young readers, the subject has guaranteed kid appeal. (timeline, further resources, glossary)