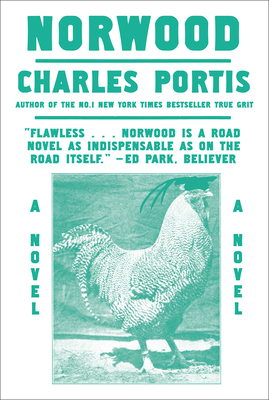 “A great American deadpan comedy. . . . Norwood, like a belt of whiskey, cleared my sinuses right up.” ––Slate

Norwood, Charles Portis’s first novel, displayed right out of the gate the wit, style, and singular voice that made him one of our great American writers. Out of the Neon Desert of Roller Dromes, chili parlors, the Grand Ole Opry, and girls who want “to live in a trailer and play records all night” comes ex-marine and troubadour Norwood Pratt. Sent on a mission to New York by Grady Fring, the Kredit King, Norwood has visions of “speeding across the country in a late model car, seeing all the sights.” By the time he returns home to Ralph, Texas, Norwood has met his true love, Rita Lee, on a Trailway bus; befriended Edmund B. Ratner, the self-described “world’s smallest perfect man”; and helped Joann, “the chicken with a college education,” realize her true potential in life. As with all of Portis’s fiction, the tone is cool, sympathetic, funny, and undeniably American.

Charles Portis (b. December 28, 1933, d. February 17, 2020) lived in Arkansas, where he was born and educated. He served in the Marine Corps during the Korean War, was the London bureau chief of the New York Herald-Tribune, and was a writer for The New Yorker. He was the author of five novels: Norwood, The Dog of the South, Masters of Atlantis, True Grit, and Gringos.