Living the 1.5 Degree Lifestyle: Why Individual Climate Action Matters More Than Ever (Paperback) 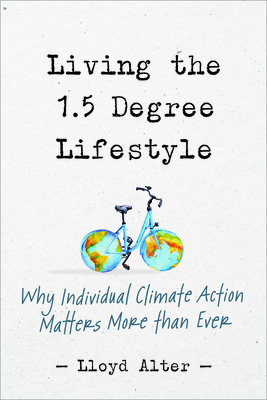 Living the 1.5 Degree Lifestyle: Why Individual Climate Action Matters More Than Ever (Paperback)

Living the 1.5 Degree Lifestyle reveals the carbon cost of everything we do, identifying where we can make big reductions, while not sweating the small stuff.

The international scientific consensus is that we have less than a decade to drastically slash our collective carbon emissions to keep global heating to 1.5 degrees and avert catastrophe. This means that many of us have to cut our individual carbon footprints by over 80% to 2.5 tonnes per person per year by 2030. But where to start?

Grounded in meticulous research and yet accessible to all, Living the 1.5 Degree Lifestyle is a journey toward a life of quality over quantity, and sufficiency over efficiency, as we race to save our only home from catastrophic heating.

Lloyd Alter is a writer, public speaker, and former architect, developer, and inventor. He has published over 14,000 articles on Treehugger . He has become convinced that we just use too much of everything -- too much space, too much land, too much food, too much fuel, too much money -- and that the key to sustainability is to simply use less, what he calls Radical Sufficiency. He teaches sustainable design at Ryerson School of Interior Design and when not writing can often be found in his running shoes, on his bike, or in his 1989 Hudson single scull in Toronto, Canada.