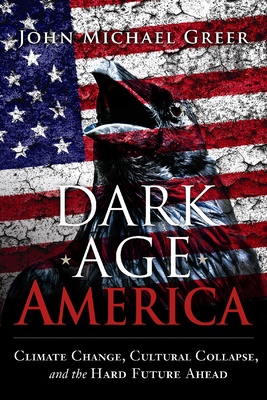 Forget the comfortable platitudes-this is our most likely future.

Forget the comfortable platitudes-this is our most likely future.

After decades of missed opportunities, the door to a sustainable future has closed, and the future we face now is one in which today's industrial civilization unravels in the face of uncontrolled climate change and resource depletion.

What is the world going to look like when all these changes have run their course? Author John Michael Greer seeks to answer this question, and with some degree of accuracy, since civilizations tend to collapse in remarkably similar ways.

Dark Age America , then, seeks to map out in advance the history of collapse, giving us an idea of what the next 500 years or so might look like as globalization ends and North American civilization reaches the end of its lifecycle and enters the stages of decline and fall.

In many ways, this is John Michael Greer's most uncompromising work, though by no means without hope to offer. Knowing where we're headed collectively is a crucial step in responding constructively to the challenges of the future and doing what we can now to help our descendants make the most of the world we're leaving them.

John Michael Greer , historian of ideas and one of the most influential authors exploring the future of industrial society, writes the widely cited weekly blog "The Archdruid Report" and has published more than thirty books on ecology, history, and nature spirituality. His involvement in sustainability issues dates back to the early 1980s, when he was active in the Appropriate Technology movement and became certified as a Master Conserver. He is the author of numerous titles, including The Long Descent, The Ecotechnic Future, The Wealth of Nature, and After Progress. He lives in Cumberland, MD, an old mill town in the Appalachians, with his wife Sara.