The Mind of Clover: Essays in Zen Buddhist Ethics (Paperback) 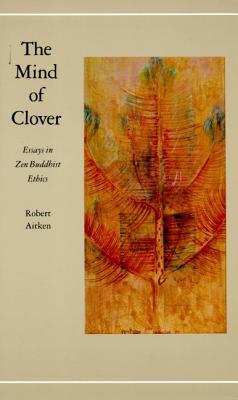 The Mind of Clover: Essays in Zen Buddhist Ethics (Paperback)

In Taking the Path of Zen, Robert Aitken provided a concise guide to zazen (Zen meditation) and other aspects of the practice of Zen. In The Mind of Clover he addresses the world beyond the zazen cushions, illuminating issues of appropriate personal and social action through an exploration of the philosophical complexities of Zen ethics.

Aitken's approach is clear and sure as he shows how our minds can be as nurturing as clover, which enriches the soil and benefits the environment as it grows. The opening chapters discuss the Ten Grave Precepts of Zen, which, Aitken points out, are "not commandments etched in stone but expressions of inspiration written in something more fluid than water." Aitken approaches these precepts, the core of Zen ethics, from several perspectives, offering many layers of interpretation. Like ripples in a pond, the circles of his interpretation increasingly widen, and he expands his focus to confront corporate theft and oppression, the role of women in Zen and society, abortion, nuclear war, pollution of the environment, and other concerns.

The Mind of Clover champions the cause of personal responsibility in modern society, encouraging nonviolent activism based on clear convictions. It is a guide that engages, that invites us to realize our own potential for confident and responsible action.

Robert Aitken (1917-2010) was Roshi of the Diamond Sangha in Honolulu and the author of Taking the Path of Zen and The Mind of Clover. His introduction to Zen came in a Japanese prison camp during World War II, after he was captured as a civilian in Guam. R. H. Blyth, author of Zen in English Literature, was imprisoned in the same camp, and in this unlikely setting Aitken began the first of several important apprenticeships. After the war Aitken returned often to Japan to study. He became friends with D. T. Suzuki, and studied with Nagakawa Soen Roshi and Yasutani Hakuun Roshi. In 1959 Robert Aitken and his wife, Anne, established a Zen organization, the Diamond Sangha. Aitken was given the title "Roshi" and authorized to teach by Yamada Koun Roshi in 1974.

“As an American who has trained in Zen practice for many years Aitken Roshi has a special understanding of the problems and questions which plague Western students of Zen.” —Yamada Koun Roshi