Brothers and Sisters: The Order of Birth in the Family: An Expanded Edition (Karl Konig Archive #11) (Paperback) 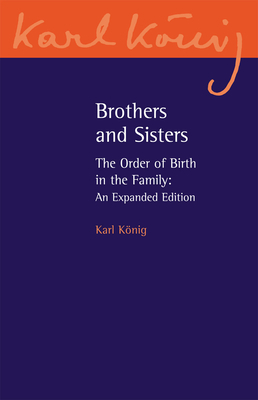 Brothers and Sisters: The Order of Birth in the Family: An Expanded Edition (Karl Konig Archive #11) (Paperback)

This is book number 11 in the Karl Konig Archive series.

'There can be no doubt that special traits of character and mental make-up are found in children and adults who belong to the different ranks in the order of birth.'

In this classic work, Karl K nig attempts to explain the various characteristics of first-, second- and third-born people, without losing sight of the tremendous individuality of the human being.

Just as our environment shapes our language, social behavior and mannerisms, so our place in the family also determines how we encounter life.

This book is a fascinating handbook for parents, teachers and caregivers. Over the years it has become a definitive reference on the subject of child development.

This newest edition in the Karl K nig Archive series includes a new introduction by series editor Richard Steel; an extended introduction by Karl K nig; two new essays: 'The Two Sisters', and 'Brother and Sister'; some of Karl K nig's lecture notes and transcriptions, and an essay by A. Limbrunner about the significance of K nig's work on family order for today.

Karl Konig (1902-66) was well-known as a physician, author and lecturer. He began his work at the Institute of Embryology at the University of Vienna. In 1940 he founded the Camphill Movement in Scotland. Based on the educational ideas of Rudolf Steiner, the special education schools for children and villages for adults with special needs are now established all over Britain and Europe, North America and Southern Africa. He is the author of The First Three Years of the Child (Floris Books). Richard Steel, born 1952 in Oxford, England, completed the Camphill seminar for Curative Education at Fohrenbuhl at Bodensee (Lake Constance), Germany, in 1975. He lived and worked there with his family in one of the households for children with special needs. Since 2008, he has shared responsibility for Karl Konig's estate and runs the Karl Konig Archive in Berlin.