An Injury to All: The Decline of American Unionism (Haymarket Series) (Paperback) 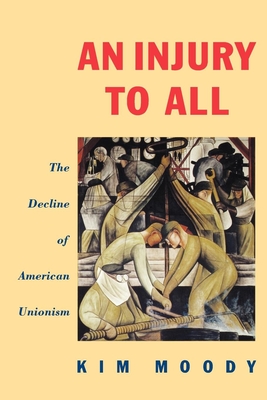 An Injury to All: The Decline of American Unionism (Haymarket Series) (Paperback)


Available to Order - Usually Arrives in Our Store in 4 to 7 Days
Over the past decade American labor has faced a tidal wave of wage cuts, plant closures and broken strikes. In this first comprehensive history of the labor movement from Truman to Reagan, Kim Moody shows how the AFL-CIO&rsquo;s conservative ideology of &ldquo;business unionism&rdquo; effectively disarmed unions in the face of a domestic right turn and an epochal shift to globalized production. Eschewing alliances with new social forces in favor of its old Cold War liaisons and illusory compacts with big business, the AFL-CIO under George Meany and Lane Kirkland has been forced to surrender many of its post-war gains.

With extraordinary attention to the viewpoints of rank-and-file workers, Moody chronicles the major, but largely unreported, efforts of labor&rsquo;s grassroots to find its way out of the crisis. In case studies of auto, steel, meatpacking and trucking, he traces the rise of &ldquo;anti-concession&rdquo; movements and in other case studies describes the formidable obstacles to the &ldquo;organization of the unorganized&rdquo; in the service sector. A detailed analysis of the Rainbow Coalition&rsquo;s potential to unite labor with other progressive groups follows, together with a pathbreaking consideration of the possibilities of a new &ldquo;labor internationalism.&rdquo;
Kim Moody was a founder of Labor Notes and author of Workers in a Lean World. He has taught at the Cornell Labor Studies Program and at Brooklyn College and is currently a Senior Research Fellow at the University of Hertfordshire in the United Kingdom.