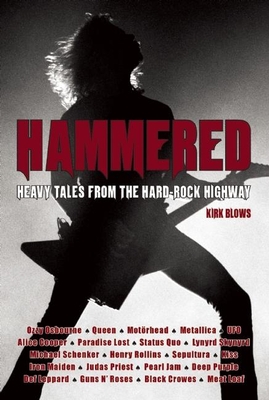 
Available to Order - Usually Arrives in Our Store in 4 to 7 Days
As a rock journalist and ex-editor of Metal Hammer magazine, Kirk Blows became absorbed into an environment in which hedonistic habits, exaggerated egos and backstage bust-ups are par for the course, while self-indulgence and excess are not just philosophies but a lifestyle. Whether being threatened by members of Mot rhead, sipping soup with Ozzy Osbourne, sharing a stage with Metallica, drinking with UFO or enjoying candid conversation with Queen, veteran journo Blows presents a collection of enticing tales that provide an often hilarious, always unique insight into an exciting and largely unseen world. Packed with over 200 adventures and anecdotes that span a twenty-year period, Hammered: Heavy Tales from the Hard-Rock Highway captures the imagination of anyone who's ever wondered what their favorite bands get up to when the stage lights go up and the audience goes home.

Kirk Blows is an experienced writer who has edited and launched magazines in both music and sport. As a rock journalist, he edited Metal Hammer and Metal CD magazines and contributed to titles as diverse as RAW, Music Week, Rock CD, Tower Records magazine, International Musician, Guitar magazine, What's On In London and Penthouse, among others. More recently, he has been a staff sports writer for The London Paper and sub-editor on The Sun, while he currently contributes a weekly column on West Ham United for the East London Advertiser. Hammered is his seventh book, with his other titles including The Essential History of West Ham (Headline, 2002), Claret & Blue Blood (Mainstream, 2004) and the five-star rated Bring Me The Head of Trevor Brooking (Mainstream, 2010).