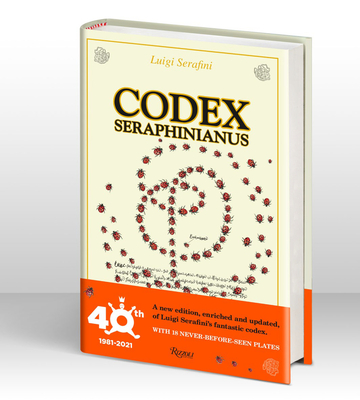 
Available to Order - Usually Arrives in Our Store in 4 to 7 Days
Published to coincide with the 40th anniversary of its original publication, this special edition of the beloved, best-selling cult classic features a new design, new cover illustration, and 15 never-before-seen drawings.

Featuring a handsome new package redesigned by the author himself, this edition is a must-have for fans and collectors of Luigi Serafini’s art. First published in 1981 in Milan by F.M. Ricci, the book has been hailed as one of the most unusual yet beautiful art books ever made. A visual encyclopedia of an unknown world written in an unknown language, it has fueled much debate over its meaning. Written for the information age and addressing the import of coding and decoding in genetics, literary criticism, and computer science, it has now fascinated and enchanted two generations.

While its message may be unclear, its appeal is obvious: it is a most exquisite artifact, blurring the line between art book and art object. This edition presents it in a new, unparalleled light complete with 15 new illustrations by the author. With the advent of new forms of communication, continuous streams of information, and social media, the Codex is more relevant and timely than ever.

A limited numbered deluxe edition, bound in real cloth and presented in a handsome slipcase, is also available. It includes a signed print of a new illustration made by the author to commemorate the 700th anniversary of the death in 1321 of Dante Alighieri, one of Italy’s greatest writers and creator of The Divine Comedy.
Luigi Serafini is a multifaceted artist, born in Rome and based in Milan and Rome. In 2007, the Padiglione d’Arte Contemporanea in Milan (PAC) dedicated a mostra ontologica (ontological exhibition) to him. In early 2021, the Centre Régional d’Art Contemporain (CRAC-Occitanie) in Sète, France, hosted an exhibition devoted to the surrealist universe of the Codex. The original plates of the Codex can be seen in the Masone Labyrinth Museum, near Parma, Italy.

“Codex Seraphinianus is the perfect book to drive a reader mad with delight and frustration. Created by Italian artist Luigi Serafini, it’s a vast compendium of surreal illustrations annotated in a made-up language. The infinitely bizarre diagrams – a horse with a caterpillar rear end, umbrellas walking on human legs, a machine extruding people – make “Codex” impossible to put down or comprehend. It feels like a biology textbook designed by Salvador Dalí on acid. The giant new 40th anniversary edition from Rizzoli includes 15 fresh drawings. To see it once is to be enchanted forever." —WASHINGTON POST