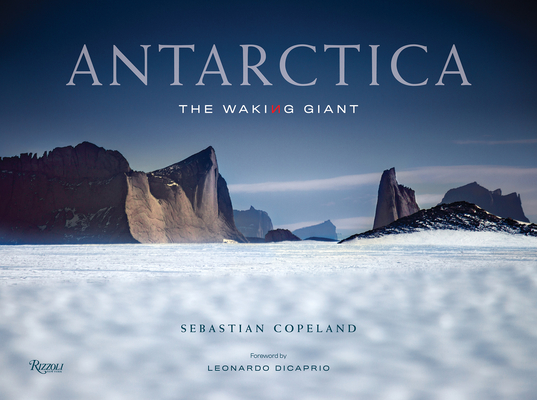 By Sebastian Copeland, Leonardo DiCaprio (Foreword by)
$75.00
On Our Shelves Now

Explorer Sebastian Copeland's stunning photography delivers unparalleled access to the least explored continent on Earth and galvanizes our awareness of the threats of global warming.

Antarctica's ice sheet is a powerful entity, alive and dynamic. It is up to three million years old; its mass is constantly and imperceptibly moving, finally calving to the sea. Deep in the heart of the continent is a barren desert of snow, while the coast teems with life: the dominion of whales, birds, penguins, and seals, which had previously evolved outside of human contact.
Until recently, scientists thought Antarctica had remained mostly untouched by climate change. But now they have warned that the ice is indeed melting-- and quickly. "My research there gave me a deeper perspective of the subtle variations taking place at the hands of climate change," says Copeland. "The images I bring back tell the story of a changing envi- ronment that spells the oncoming redrawing of the world's map, and all that it implicates."

In 2017, Sebastian Copeland was named one of 25 of the world's top adventurers of the last 25 years. With approximately 5,000 miles under his skis in the polar regions, Copeland has led numerous expeditions to document the endangered ice, reaching both the North and South Poles on foot. Copeland was twice named Photographer of the Year and has addressed the U.N., governments, universities, and Fortune 500 companies to warn of the systemic transformations taking place in the polar regions and their geopolitical consequences. In 2019, Copeland was awarded by French President Emmanuel Macron the National Order of Merit. He is a fellow of the Explorers Club and spent 15 years on the Board of President Gorbachev's NGO Global Green USA.

“This book documents over a decade's worth of trips on and around Antarctica. While the coast stirs up visions of a lost world, it is the interior that hints to another planet. I spent 84 days crossing its lifeless plateau with no help but skis and kites. Temperatures never warmed above -35C, a challenge on everything, particularly the equipment. My research gave me a deeper perspective on the variations taking place at the hands of climate change. The images I bring back tell the story of a changing environment which spells the oncoming re-drawing of the world’s map, and all that it implicates.” — 2020 International Photography Awards