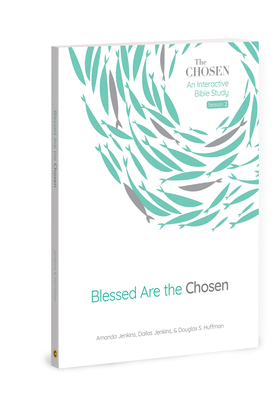 This is book number 2 in the The Chosen Bible Study Series series.

Blessed Are the Chosen is an eight-lesson interactive Bible study for individuals or small groups based on season 2 of the groundbreaking television show, The Chosen. This study brings both the Old and New Testaments to life in an approachable and conversational way.

This study guide works in tandem with each episode of the show and includes:
Once we belong to Him, we’re not only given a new identity; we’re ushered into a new reality—one that is sure, powerful, and life changing.

We have hope no matter our circumstances.
We have assurances and resources, even in life’s trials.
We are blessed in all things because we are chosen by Him.

Amanda Jenkins is an author, speaker, and the lead creator of The Chosen’s additional content. Her husband, Dallas Jenkins, son of celebrated Left Behind author Jerry Jenkins, directed and produced over a dozen feature and short films before creating The Chosen, the largest crowd-funded media project of all-time. They live outside of Chicago with their four children. Dr. Douglas S. Huffman, the evangelical biblical consultant for the television series, is Professor of New Testament and Associate Dean of Biblical and Theological Studies at Talbot School of Theology (Biola University) in California.