True Tales from Another Mexico: The Lynch Mob, the Popsicle Kings, Chalino, and the Bronx (Paperback) 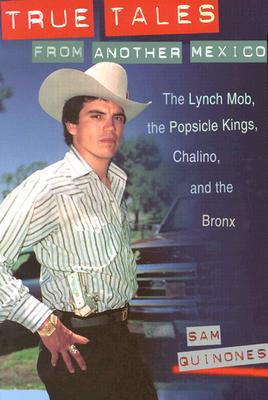 As journalist Sam Quinones convincingly demonstrates, much of Mexico was already changing before the July 2000 presidential elections which ousted the PRI and presented the world with President-elect Vincente Fox. Fox's victory marked the triumph of another Mexico, a vital, energetic, and creative Mexico tracked by Quinones for over six years.

This side of Mexico gets very little press. . . . yet it is the best of the country. . . . people who have the spunk to imagine something else and instinctively flee the enfeebling embrace of PRI paternalism. . . . newly realistic telenovellas show the gray government censor that the country is too lively to abide his boss's dictates. . . . Some twelve million Mexicans reside year-round in the United States. . . . so] the United States is now part of the Mexican reality and is where this other side of Mexico is often found, reinventing itself.--from the introduction.

Quinones merges keen observation with astute interviews and storytelling in his search for an authentic modern Mexico. He finds it in part in emigrants, people who use wits and imagination to strike out on their own. In poignant stories from north of the border--about Oaxacan basketball leagues in southern California and the late singing legend Chalino S nchez whose songs of drug smugglers spurred the popularity of the narcocorrido--Quinones shows how another Mexico is reinventing itself in America today. But most of his stories are from deep inside Mexico itself. There a dynamic sector exists. It is made up of those who instinctively shunned the enfeebling embrace of the PRI's paternalism, including scrappy entrepreneurs such as the Popsicle Kings of Tocumbo and Indian migrant farmworkers who found a future in the desert of Baja California. Here, too, are true tales from ignored margins of society, including accounts of drag queens and lynchings. From the fringes of the country, Quinones suggests, emerge some of the most telling and central truths about modern Mexico and how it is changing.

This book expands our knowledge of modern Mexico many times over. Quinones unearths a wealth of material that has in fact gone unnoticed or been hidden.--Professor Francisco Lomel , University of California, Santa Barbara