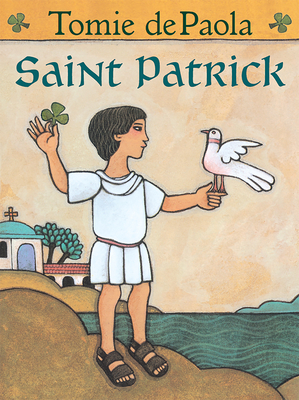 
Available to Order - Usually Arrives in Our Store in 4 to 7 Days
From the author of Strega Nona and Quiet comes an illustrated tribute to the Irish patron saint--now in a special format just right for the youngest readers.

Beloved children's book author-illustrator Tomie dePaola recounts the life of Saint Patrick--from his noble birth in Britain, to his captivity in Ireland, to the visions which led him to return and found the first Christian church in Ireland.

With his signature bold illustrations and engaging prose, Tomie dePaola recounts a number of legends about the Saint--including the well-known story of how he drove the snakes from Ireland, and his association with the shamrock, as well as less familiar details of his journeys.

This timeless story, now available in a sturdy, colorful board book format, is a perfect introduction to these important Irish legends, and an ideal St. Patrick's Day gift-- perfect for sharing with your family.

For older readers, the large-format edition Patrick: Patron Saint of Ireland includes even more information, and a note from the author about his inspiration.
Tomie dePaola is the beloved Caldecott Honor- and Newbery Honor-winning author and/or illustrator of close to 250 books, including Strega Nona and Quiet. Tomie was born in Connecticut and grew up there with his parents, brother, and two sisters. He loved reading and books from an early age and knew, when he was four, that he wanted to write and illustrate stories when he grew up. Tomie is the recipient of numerous awards and honors, including the Laura Ingalls Wilder Award from the American Library Association for his "substantial and lasting contribution to literature for children," the Smithson Medal from the Smithsonian Institution, the Regina Medal from the Catholic Library Association, and the Kerlan Award from the University of Minnesota for his "singular attainment in children's literature." He was nominated for the Hans Christian Andersen Award in illustration and has received the New Hampshire's Governor's Arts Award of Living Treasure.
Praise for the picture book edition, Patrick: Patron Saint of Ireland

"Fans of the prolific dePaola's heartfelt celebrations of religious themes will welcome this handsome picture-book biography. His signature style is well showcased here and, as he did in The Lady of Guadalupe , dePaola effectively integrates both the tones and design elements of (in this case) Celtic art into his renderings. . . . Readers will particularly enjoy the addition of five legends about St. Patrick, including the snakes and the shamrock. This well-designed entry has perennial appeal."—Publishers Weekly

"DePaola's rich colors are somewhat muted here, and beautifully balanced; the whole effect is decorative, reverent, and serene. Five legends appear at the end, each succinctly stated and with a single illustration--a good way to differentiate between the historical and the apocryphal. An excellent contribution."—Kirkus Reviews

"The colors are rich and warm, and the gestures and expressions speak of elemental drama, exaggerated and yet formalized, and with occasional playful detail. . . .  In a final cheerful note, dePaola remembers himself as a young child seeing a 'very colorful statue' of Saint Patrick and the snakes when his Irish maternal grandfather took him to church in Connecticut. The joy of those memories can be felt in this picture book." —Booklist