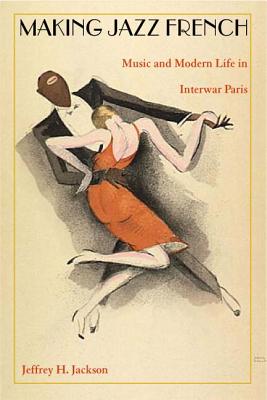 Between the world wars, Paris welcomed not only a number of glamorous American expatriates, including Josephine Baker and F. Scott Fitzgerald, but also a dynamic musical style emerging in the United States: jazz. Roaring through cabarets, music halls, and dance clubs, the upbeat, syncopated rhythms of jazz soon added to the allure of Paris as a center of international nightlife and cutting-edge modern culture. In Making Jazz French, Jeffrey H. Jackson examines not only how and why jazz became so widely performed in Paris during the 1920s and 1930s but also why it was so controversial.

Drawing on memoirs, press accounts, and cultural criticism, Jackson uses the history of jazz in Paris to illuminate the challenges confounding French national identity during the interwar years. As he explains, many French people initially regarded jazz as alien because of its associations with America and Africa. Some reveled in its explosive energy and the exoticism of its racial connotations, while others saw it as a dangerous reversal of France's most cherished notions of "civilization." At the same time, many French musicians, though not threatened by jazz as a musical style, feared their jobs would vanish with the arrival of American performers. By the 1930s, however, a core group of French fans, critics, and musicians had incorporated jazz into the French entertainment tradition. Today it is an integral part of Parisian musical performance. In showing how jazz became French, Jackson reveals some of the ways a musical form created in the United States became an international phenomenon and acquired new meanings unique to the places where it was heard and performed.