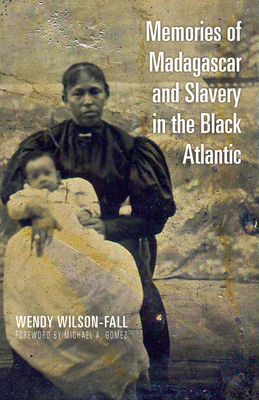 By Wendy Wilson-Fall, Michael Gomez (Foreword by)
Please email or write store for pricing and availability information.
Available to Order - Usually Arrives in Our Store in 4 to 7 Days

From the seventeenth century into the nineteenth, thousands of Madagascar’s people were brought to American ports as slaves. In Memories of Madagascar and Slavery in the Black Atlantic, Wendy Wilson-Fall shows that the descendants of these Malagasy slaves in the United States maintained an ethnic identity in ways that those from the areas more commonly feeding the Atlantic slave trade did not. Generations later, hundreds, if not thousands, of African Americans maintain strong identities as Malagasy descendants, yet the histories of Malagasy slaves, sailors, and their descendants have been little explored.

Wilson-Fall examines how and why the stories that underlie this identity have been handed down through families—and what this says about broader issues of ethnicity and meaning-making for those whose family origins, if documented at all, have been willfully obscured by history.

By analyzing contemporary oral histories as well as historical records and examining the conflicts between the two, Wilson-Fall carefully probes the tensions between the official and the personal, the written and the lived. She suggests that historically, the black community has been a melting pot to which generations of immigrants—enslaved and free—have been socially assigned, often in spite of their wish to retain far more complex identities. Innovative in its methodology and poetic in its articulation, this book bridges history and ethnography to take studies of diaspora, ethnicity, and identity into new territory.

“Wendy Wilson-Fall has skillfully turned intriguing memories of ancestors’ origins into a fascinating, well-researched story informed, notably, by history, anthropology, sociology, and psychology. Memories of Madagascar and Slavery in the Black Atlantic shows us a new, exciting way of researching, interpreting and writing the complex history of enslaved people in the Atlantic world and beyond.”—Sylviane A. Diouf, author of Slavery's Exiles: The Story of the American Maroons

“Wilson-Fall’s contribution fills a necessary void in the literature surrounding the slave trade. …[She] is a deeply thoughtful scholar who excels in drawing trans-historical linkages from the hidden recesses of slave historiography.”—International Journal of African Historical Studies

“This innovative study marries two very divergent sources of knowledge—historical documentation from the era of the slave trade with the narratives of remembrance of ancestors from the present—to reveal a compelling story that links Madagascar with colonial North America and the struggles of the descendants of Malagasy immigrants to retain an identity that was endangered through slavery.”—Paul E. Lovejoy, Distinguished Research Professor, York University

“This outstanding and original book offers highly significant interventions: it connects Madagascar to the Atlantic world instead of the usual Indian Ocean trade; it broadens our knowledge on points of African originations en route to the United States; and it shows how to use non-archival sources to construct narratives about enslaved people. Combining memory with autobiography, the engaging analyses create new pathways to the understanding of the African diaspora and the survival of accumulated traditions while providing, for the first time, the uniqueness of the Malagasy experience and identity, the relevance of naming and families, the heterogeneity of the African American population, and the use of ethnic identity as a signifier of difference.”—Toyin Falola, President, African Studies Association, and Jacob and Sanger Mossiker, Chair in the Humanities, University of Texas at Austin